An Introduction to Sicilian Wines

Thanks to a Twitter tasting sponsored by Wines of Sicily, I was introduced to some wines I had never tried before and some varietals of which I had never heard. I also learned a little bit more about how wines are labeled in Sicily, and that there are nearly 50 native grape varietals unique to Sicily.

Sicily is the triangular-shaped island off the “toe of the boot” in Italy and is the largest Mediterranean island.

The weather in Sicily is very favorable for grape growing. It has a lot of bright sunshine and reliably moderate rainfall, but overall a very warm and dry climate.

This warm and dry climate is ideal for  grape growing because of the absence of mildew and rot (which doesn’t tend to happen in a drier climate). Much of Sicilian wine is produced from organic grapes (because they don’t have a lot of disease), and therefore do not need to be sprayed with harsh chemicals.

There are 250,000 acres of combined international and native grapes planted in Sicily. The best known native grape varietals are Grillo, Catarratto, Nero d’Avola, and Frappato, of which all but the Catarratto I had the opportunity to sample this week.

Below is a map of the country with wine growing provinces marked with numbers. The names beside the circles mark some of the major wineries in Sicily. For this blog post I will focus on the wines I received from Mandrarossa (Nero d’Avola), Planeta (Frappato), and Firriato (Grillo), which you can easily spot on the map. 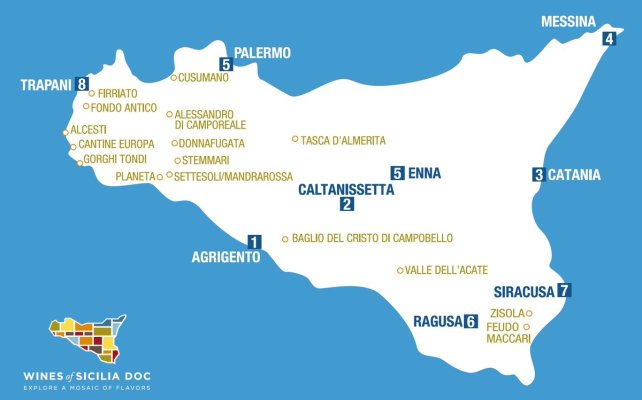 Now that we have our geography lesson, next a tasting…

The first wine we tried was the Grillo produced by Firriato. Because wine labels read a little differently in Sicily, I have done my best in the photo below to break down what each item means. It’s rather tricky not being too familiar with Sicilian wines, and because the labels can vary in their layout.

Grillo: It’s pretty much like the Sicilian version of a very light un-oaked Chardonnay. My tasting notes for the Grillo are as such: Light straw color, off dry, flavors of lemon and hints of tangerine. It’s a nice wine on its own, however some pairing ideas would be: grilled fish, shrimp, scallops or vegetables, brie and crackers (gluten free-Paleo style, of course!).

Next up in our flight was a Frappato. Frappato is most often used as a blending grape with Nero d’Avola (which you will read more about later in this blog post). In the bottle below, Frappato goes solo…

Label breakdown: Varietal (grape) is Frappato, produced by the Winery Planeta, Vintage (year grapes were harvested) 2015. This time the label does not bear a brand but the Designation Sicilia Vittoria DOC. Vittoria is a town in the province of Ragusa and a DOC is an Italian wine classification (there are 330 DOC titles, each with its own laws overseeing viticultural zone, grape varietals and style of wine). So, it would be sort of like saying Sonoma, California, if Sonoma had only certain grapes it could grow in their county and the wine produced in a certain style.

Upon tasting, the wine very much reminded me of a Beaujolais Nouveau, trying to mature into a more robust wine like a Pinot Noir or a Grenache. That’s no knock on Beaujolais Nouveau (made from the Gamay grape and released the same year it is harvested to showcase it’s fresh and fruity deliciousness), and which coincidentally is about to be released this year on November 17th. The Frappato definitely had Beaujolais Nouveau characteristics, but also had a nice charcoal and smoke overtone.

My pairing suggestions would be roasted chicken and root vegetables, mild to medium cheeses, mushroom-centric dishes, and believe it or not, a cheeseburger, especially with mushrooms on it. This is a fun, affordable, crowd friendly red wine, and keep it in mind for your upcoming Thanksgiving table!

Lastly (but not least, of course) comes the bottle of Nero D’Avola sent to us by Mandrarossa.

Once again, we’ll do the label breakdown. The Producer/Winery is Mandrarossa, the Varietal is Nero D’Avola. The Vintage (which is waaay to the right on the bottom is 2015). The phrase “Costa Dune” means sandy coast, and I am sure that’s an accurate description of the vineyards.

Upon examination, we noted the wine’s deep yet brilliant color, deep mauve, and its richness exuding hints of oregano and plum spice. I am not making this up. I’m going to venture out and say that the things we smelled in the wine probably grow within yards of the grapes.

Therefore, a simple pairing rule to keep in mind is: If it grows together, it goes together. So I’ll say a nice red meat sauce with basil and oregano on top of zucchini “noodles”, an eggplant lasagna, Cincinnati chili, or beef stew. Just have fun with it.

I hope you enjoyed reading a little about Sicilian wines, and that if you see them where you happen to buy wine, you will give them a try.

Cheers and don’t be afraid to try something you’ve never heard of before! It might just be your new favorite.