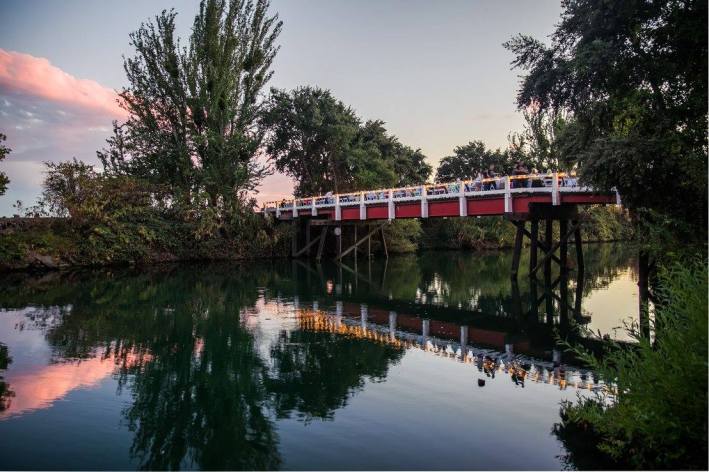 Last Sunday, not one but two dinners took place on a bridge to celebrate Farm-to-Fork and the amazing bounty we are lucky to enjoy living in the greater Sacramento region.

One of those dinners took place on the Deadhorse Island Bridge and was hosted by the California Pear Advisory Board. The menu featured locally grown produce, namely pears, in almost every course, and the signature beverage of the evening was a pear martini crafted by Jay Yoon of Dawson’s Steakhouse.

From the moment I heard this dinner was going to take place for people who were unable to attend the Tower Bridge Gala dinner, I was very excited for the organizers, and very interested in attending. Especially when I heard my friend and fellow blogger (Munchie Musings), Catherine Enfield would be attending.

It’s really something when you anticipate something so much and it turns out to be everything you expected, but so much more. On the evening of September 27th, we arrived in Walnut Grove and the Dead Horse Bridge (given its name from retired work horses who spent their last days on the island), located across the water from Giusti’s (a local restaurant responsible for the main course to be served that evening). The table and the bridge were beautifully decorated for the guests slated to dine there. 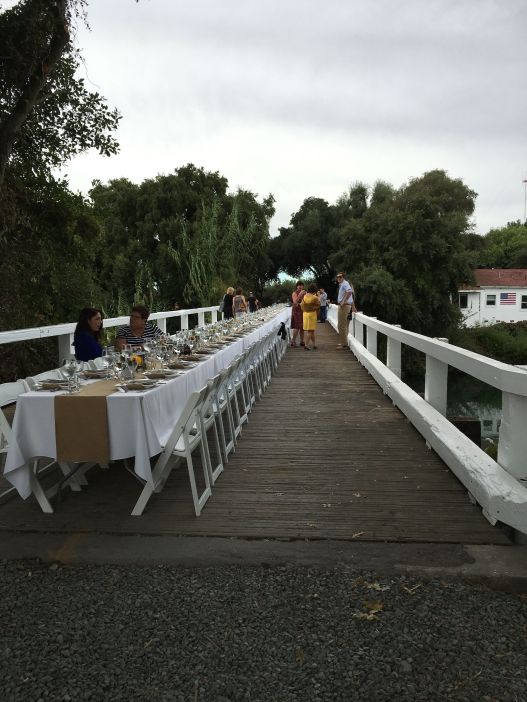 Soon Andy and I were mingling amongst the other guests, as well as Catherine and her guest. The starter was a pizza from Hot Italian in Sacramento, featuring pears and gorgonzola cheese, their Murino pizza. 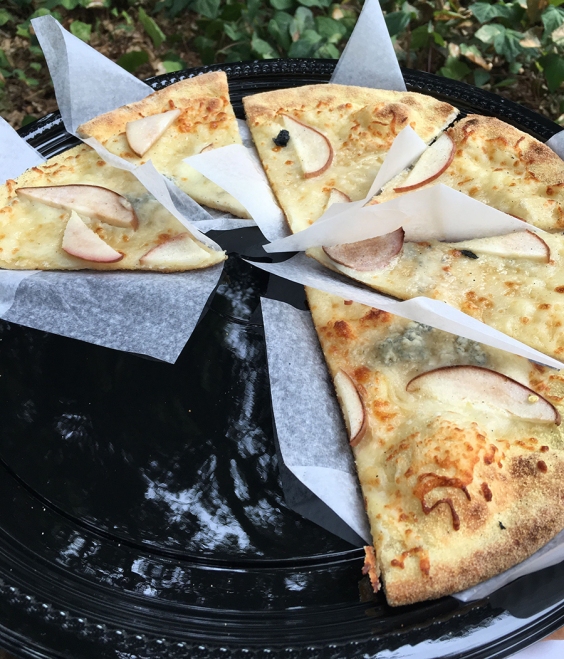 Being gluten free 95% of the time did not stop me from tasting the appetizer and I enjoyed it with a pear martini, crafted by the aformentioned Jay Yoon of Dawson’s Steakhouse. If you haven’t been to Dawson’s, you’re missing out. Dawson’s is one of the most underrated restaurants in Sacramento. If you’re a wine lover, check out the wine dinners they have every few months. Here’s Jay making my martini! 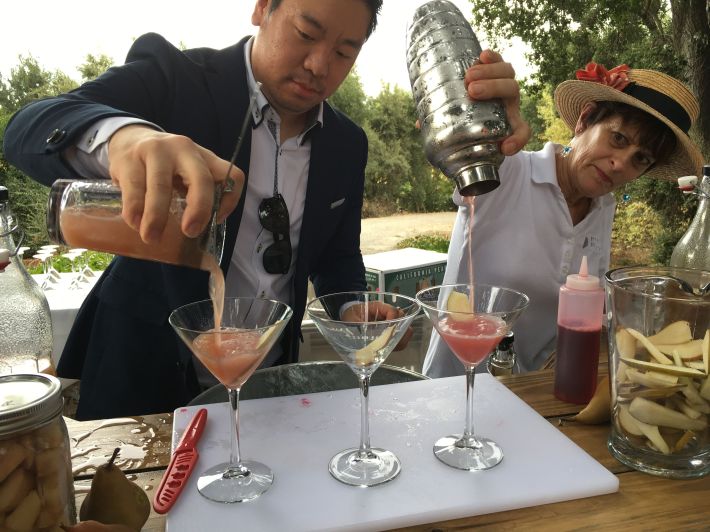 I loved the addition of the pizza and the pear martini. It was such a touch of class, and made the Dead Horse Bridge Dinner seem so much like a private cocktail party. Then there was the wine, all provided by Bogle Wines and the beer, provided by Sudwerk Beer. The sodas were provided by River City Sodas, and the drinking water was even infused with pear. I could tell the organizers were beaming with pride and showcasing their product (pears) in the best way possible.

On display were several works of art (photography) by Skyler Stanley, including the piece below. Skyler was also the event photographer and took all the photos that were made into a video slideshow of the event that can be viewed by clicking here. 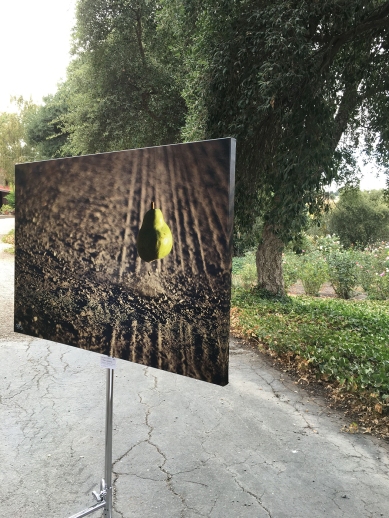 Soon it was time for the main event, and we were seated at our assigned places, at an enormous table that spanned the length of the bridge. I’m guessing that it sat about 200 people.

Then the courses began. First, a Delta Islands organic tomato and basil with fresh mozzarella salad. The Bogle Chenin Blanc was a perfect pairing with this salad and the next salad to come. 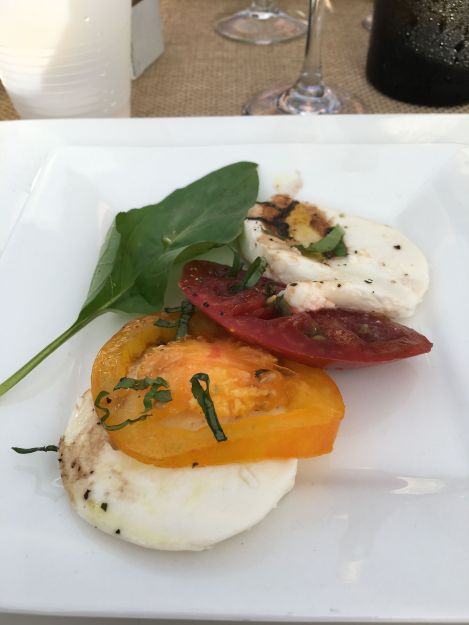 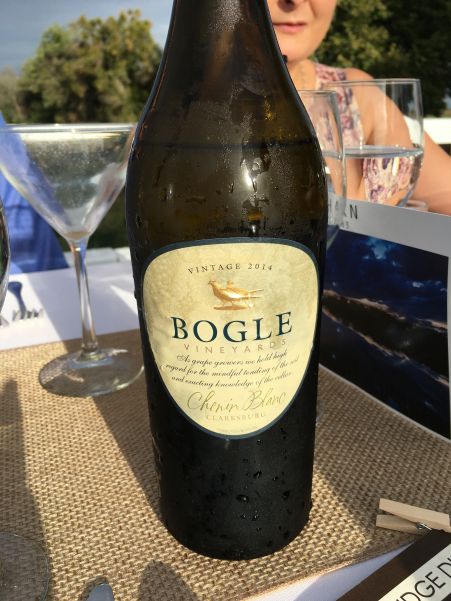 The next salad we enjoyed was an endive salad with pears, Point Reyes Blue Cheese, and candied walnuts. 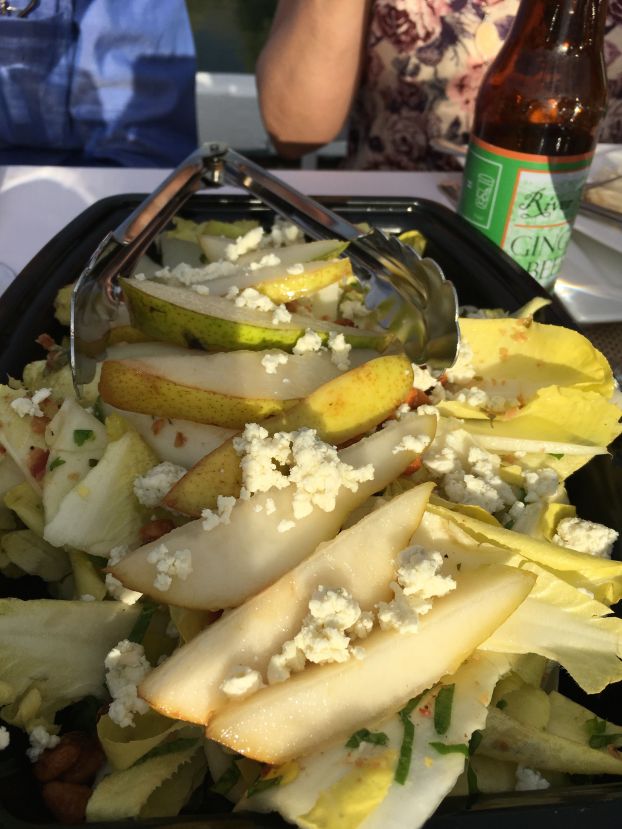 The first salad was a traditional mozzarella salad, but the endive salad really showcased the pears. Blue cheese and walnuts are a classic sidekick for pear. and the platter of salad didn’t last long amongst my table mates.

Then following the salads was the main course: A barrel-roasted pork rib roast with caramelized pears. Some meals just go down in history as the best you have ever had, no matter how simple the preparation. This meal was headed that way, and the pork we had next only added to my enthusiasm.

It’s really the atmosphere and the company with which you share your meal that makes it great, but it doesn’t hurt to have one of the best pieces of pork you have ever had in your life in front of you as well. The pears in the dish gave a sweet element that danced with the well-seasoned pork. Guests were also served sweet corn-on-the-cob from Dixon with the main course. Bogle’s Petite Sirah and Phantom Red Blend rounded out the wine selections. 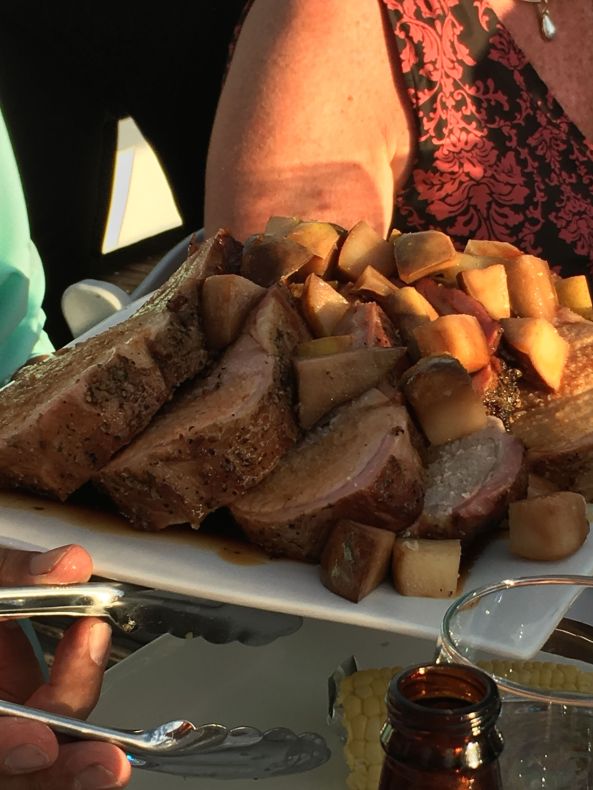 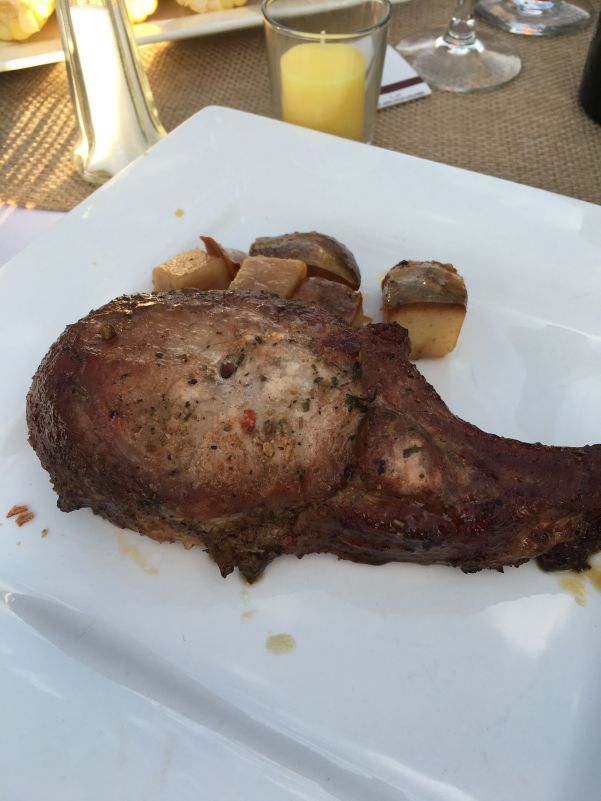 OK, so I was all ready for seconds. I really was. But next came dessert, a delightful array of items from Golden State Fruit including dark chocolate crumbs, dried and fresh pears, almonds and Fiscalini cheddar cheese. It was like I was in charge of the dessert plate because it was a stunning combination of all of my favorite things on a plate! 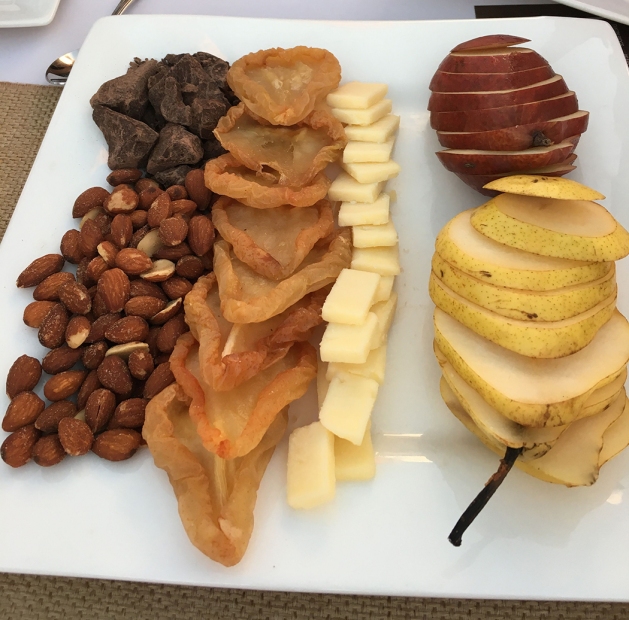 The words amazing and incredible can’t even describe my experience. The Pear Bridge Dinner was such a great success, but could not have been without the help and donations of time and goods by the following people… I want to give a round of applause to the chefs who put the meal together: Mark Morais of Guisti’s and his team –Sam Rainwater, John Baranek and Katie Morais. More thanks goes out to J.B. & Jeannie Morais of Delta Islands; Sudwerk Brewing Co.; Rich Collins, California Endive; Jim Boyce, Produce Express; Dixon Ridge Farms; Bogle Vineyards; Rivermaid Trading Company and all of the local Delta pear farmers, as well as Golden State Fruit.

More kudos goes to Chiles Wilson, Daniel Wilson, Chiles Wilson Jr., CJ Jensen, and Dixie Wilson for the use of her bridge. Rivermaid Trading Company was responsible for set-up, serving and clean up before, during and after the event. Big love to Jay Yoon and his assistant, Susan, from Dawson’s Steakhouse in the Downtown Hyatt for the delicious pear martinis. More thanks to Jody Bogle, Janice Lucas, Steve Lucas, Tim Lucas and Judy Rhea for pouring wines and beverages. Emily Allen of EJA Designs created the beautiful flower arrangements for the event. 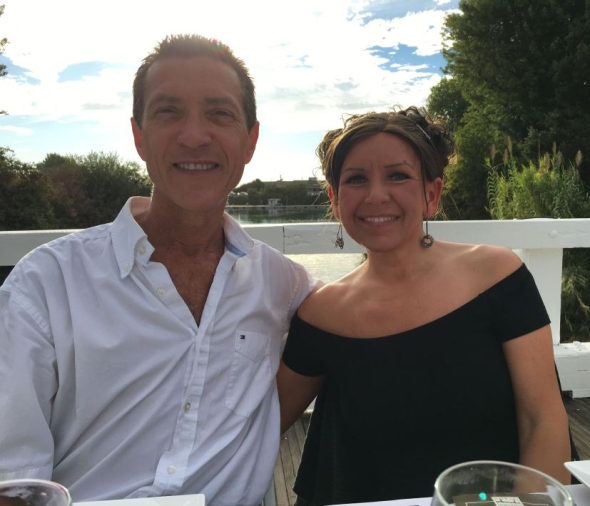 The proceeds of the dinner were generously donated to the victims of the Lake County fire.

To say the Pear Bridge Dinner was memorable evening is simply an understatement, and if you’re reading, one I hope you’ll take part next year. To keep up with future events, you can find the California Pear Advisory board on Facebook here, follow them on Twitter here, on Instagram here and on Pinterest here.