Dine Downtown kicks off tomorrow (Wednesday, January 9th, running though Friday, January 18th), and I was happy to have been asked by the owner of the downtown gem Mayahuel (Ernesto Delgado), to preview the menu he is offering for the special event.

Mayahuel (which is named after Mayahuel, the Aztec goddess of the agave plant and fertility) has been a dining destination in Sacramento since March of 2011, and it’s quickly become one of my favorite places to go for dinner.

You might remember my preview of Mayahuel’s pre fixe menu from last year, and how much I loved their chorizo-topped rib eye. If you didn’t get to try the steak last year, have no fear! It’s on the Dine Downtown menu again this year. If you’re not a steak fan, Mayahuel has some tasty alternatives, as well as some vegetarian and vegan options.

Andy and I had dinner at Mayahuel on Friday (we had a Groupon and I treated us for our Monthaversary dinner). Then it was back to Mayahuel last night for more Mexican food and the Dine Downtown preview. Since I could eat Mexican food everyday and not tire of it, I was in heaven. 🙂

Here’s a shot of Mayahuel’s Dine Downtown menu and your choices for $30 per person: 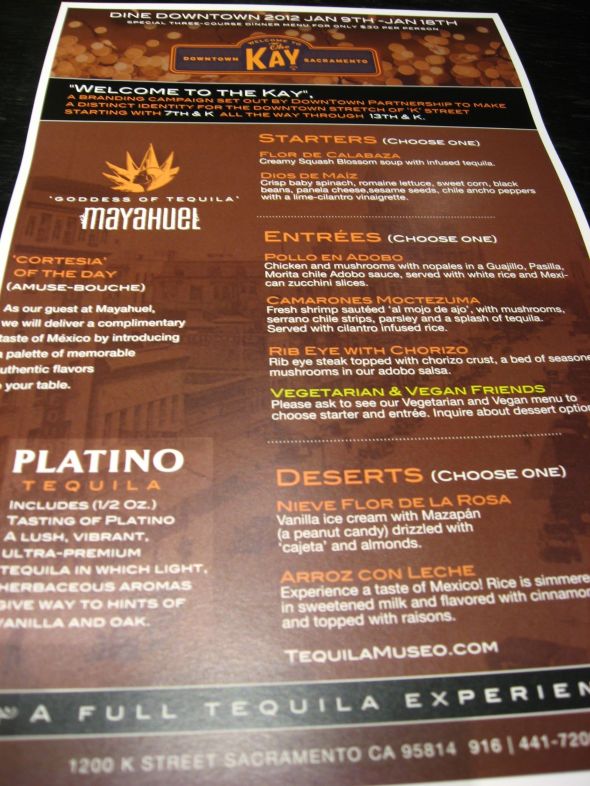 Here’s the low down on what we enjoyed and some pictures of our selections:

Andy threw out a few wines and I immediately went for a 2008 Tempranillo made by Vina dos Rios, (Crestwood Monarch Winery) in El Dorado County.

Then we were served an amuse bouche (which changes nightly). It was a spicy tomato broth with pasta.

Then we were served some house made chips accompanied by some tomato salsa. I really love the thickness of the chips and that they almost taste sweet.

For his appetizer, Andy chose the Flor de Calabaza: Creamy Squash Blossom soup with infused tequila. It was very rich and probably not for the calorie conscious (which Andy is not)! 😉

My appetizer choice was the Dios de Maíz: Crisp baby spinach, romaine lettuce, sweet corn, black beans, panela cheese, sesame seeds and chile ancho peppers, served with a lime-cilantro vinaigrette. I had the same salad for my entrée on Friday night with chicken added to it, so I already knew what to expect. I am addicted to those cheese cubes!

Andy is pretty nice about sharing with me, so this time he ordered the Rib Eye with Chorizo: (Rib eye steak topped with chorizo crust, a bed of seasoned mushrooms in adobo salsa). Once again, the steak was cooked perfectly and the chorizo was really packed with flavor and spice.

For my entrée I went with the Pollo en Adobo: Chicken and mushrooms with nopales in a Guajillo, Pasilla, Morita chile Adobo sauce, served with white rice and black beans. How I missed you rice and black beans. It was such a treat for me, I probably could have had more of them for dessert.

But for dessert, I ordered the Nieve Flor de la Rosa: a Vanilla ice cream served with Mazapán (a peanut candy) drizzled with caramel and almonds. It was delectable, but I won’t throw Andy under the bus and let you know that he had most of it (oops). I was only in it for the yummy peanut candy (a lot like peanut flavored powdered sugar in a disc shape).

Andy ordered the Arroz con Leche. It’s rice that is simmered in sweetened milk and flavored with cinnamon, and topped with raisins. That’s me in the background waiting to have a taste. Once I did, I loved the cinnamon and the texture of the rice. And then Andy stole it back and polished it off. Whatever!! 😉

Notable: Try their NapaToro wine. It is made exclusively for Mayahuel. If you don’t like wine, by all means, have a margarita or ask the bartender about trying some tequila. The staff at Mayahuel is very knowledgeable on the food and beverages they serve and are willing to answer any questions you might have.

For more information on Dine Downtown, you can click here.