Well, I just found my new favorite restaurant. Unfortunately for me, it’s in Downtown Napa, so I won’t be able to visit as often as I would like. The name of the restaurant is Tarla Mediterranean Grill and they serve cuisine that is a beautiful blend of Turkish and Greek influences. It also happens to be located in the same building as one of my favorite places to stay in Napa, the Avia Hotel.

I picked Tarla Mediterranean Grill not only because of its close proximity to the Uptown Theatre (where we were headed later to see Robert Cray and his band), but it was also a nod to Andy’s heritage. Andy is half-Greek, so I thought it would be the perfect choice for his birthday celebration.

Tarla Mediterranean Grill opened last year, and is owned by Yusuf Topal and his wife Breanna. Yusuf’s background is in hospitality, as he was a former maitre d’ and manager of various cruise ship restaurants.

The head chef is Gerry Castro. He attended CIA and has worked for the likes of Far Niente Winery, Ceja Vineyards, Farmstead Restaurant, and Murray Circle (a Michelin starred restaurant in Sausalito).

The restaurant seats only 46, and has a great patio area if you prefer to dine outside. The interior has a clean, informal, and inviting look with tangerine and olive hues in the decor. There are nice touches to each table including candles and turkish white copper cups (in which water is served to guests).

We kicked off the birthday dinner with a half bottle of Malamatina Retsina, and began the meal with Tarla’s Greek salad. I also ordered a side of hummus to use as a dip for the tomatoes and cucumbers in the salad.

Then we ordered the Meatballs served with caramelized eggplant, bell peppers, and fresh tomato sauce. 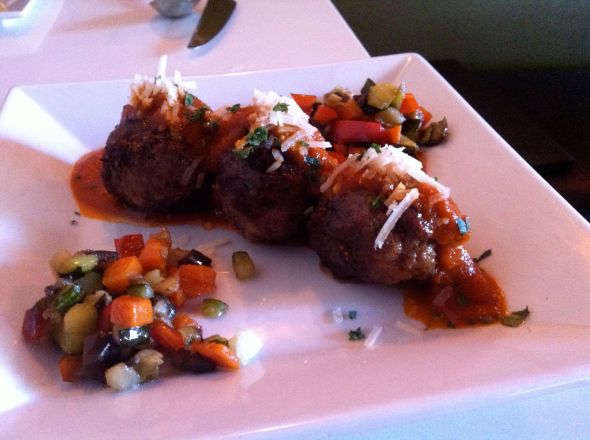 For my main course, I ordered the Tiger prawns and diver scallops, served with parsnip puree and pomegranate currant sauce. Everything in the dish is Paleo, and it was the first dish that caught my eye on the menu. It was almost like the chef called Andy, asked him what all my favorite foods are, then put some of them together. It was as wonderful as I imagined.

Andy chose the Fresh Alaskan halibut, which is pistachio crusted and served with vegetable ragu and white wine butter sauce. Again, every ingredient was Paleo and once again, unbelievably good. 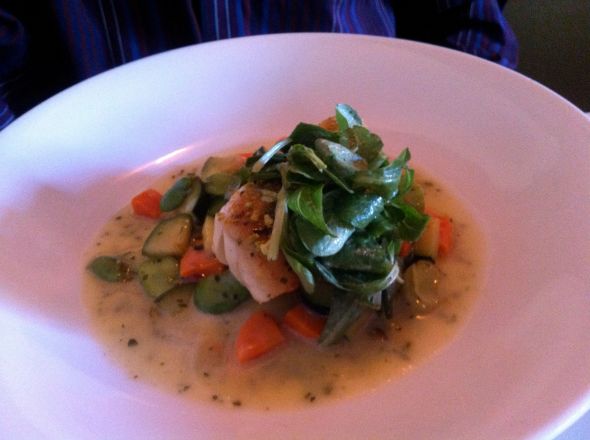 We finished our meal with 2 desserts. This usually works because I take one or two bites and then pass over to Andy to finish. That way, nobody is deprived. And it was a special occasion, so what the heck. 🙂

The first dessert was poached apricots stuffed with mascarpone cheese and rolled in pistachios. The sweetness was balanced with the cheese filling, and pistachios just make something that already tastes great, taste even better.

At this point writing my post, I am realizing we really ate a lot of food that night! But wait, there’s more…

The owner brought out a second dessert for us like nothing I have ever seen or tried before! It is called kunefe (shredded phyllo dough baked with shredded coconut and sweet cheese). Not primal or even Paleo, but a nice treat nonetheless. I had a few bites and had Andy finish the rest. The texture and flavor was unlike anything I have ever tried before. Baklava might sound good and traditional, but trust me… try the kunefe. You can thank me later. I liked it so much I am going to work on a gluten-free, sugar free version. 🙂 Just wow.

Other dishes on the menu include spanokopita, calamari, saganaki, chicken and lamb shish kebabs, Turkish stuffed eggplant, and musakka (a traditional dish in both Turkey and Greece). By the way, if you’ve never had saganaki, just do it. It’s amazing.

The other wine we shared at dinner was a 2011 Peju Sauvignon Blanc. The wine list is so reasonable it’s unreasonable! My alcohol bill for the retsina and the sauvignon blanc was only about $35. Also, every Wednesday, the restaurant features a select wine list with bottles 50% off until 7:30pm.

No entree on the menu is over $20, and as you can see in the pictures, the portions are generous.

This entry was posted on September 15, 2012 by cavegrrl. It was filed under Uncategorized and was tagged with food, Greek, napa, restaurants, retsina, reviews, Tarla Mediterranean Grill, wine.