Experience the Stunning Views of San Francisco at the Cityscape Lounge

A few weeks ago I was invited to be part of a media preview at the Hilton San Francisco Union Square for the unveiling of their 46th floor lounge, Cityscape. Cityscape is located inside tower one of the Hilton (which also happens to be the largest hotel on the West Coast).

It’s hard to leave out hyperboles when describing the Cityscape Lounge, because it’s almost too pretty to believe. I was giddy as we rode the elevator up and as I watched the number climb on the display. Once inside the lounge, I was awestruck.

The Cityscape has a 360-degree view of San Francisco and beyond. Through it’s 14ft floor-to-ceiling windows, you can see the Golden Gate Bridge, Coit Tower, the Transamerica Pyramid, Chinatown, AT&T Park, the Marin Headlands, Nob Hill, Oakland, and giant barges on the Bay. Now that Cityscape Lounge is open to the public, it’s at the top of my list for must-see sites in the City.

“No two days look the same from Cityscape, where San Francisco weather flows over the ever changing skyline,” said Lenny Gumm, general manager, Cityscape. “What doesn’t change are the views and the great food and drinks to enjoy with them.”

And instead of trying to put anymore of what I saw into words, below are the photos I took and a Facebook live video I broadcasted that evening to give you a full view of the space! 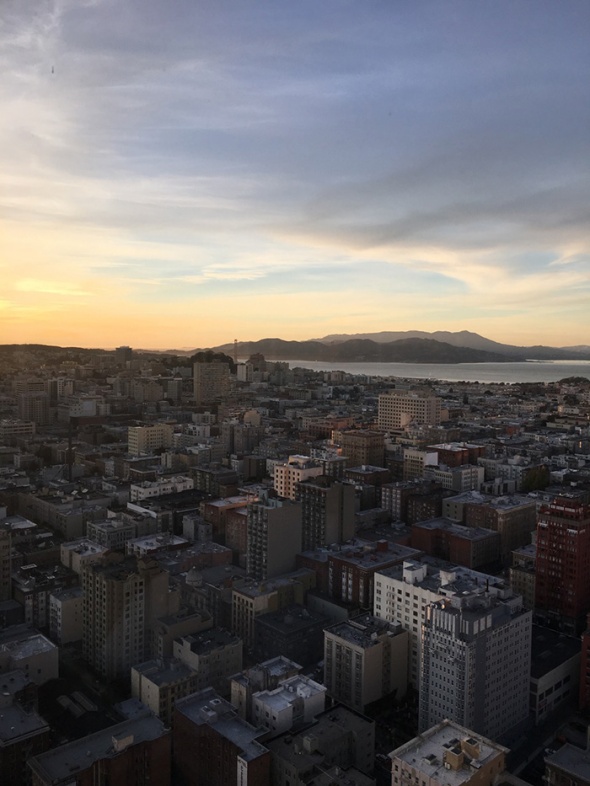 The tables, couches and seats line the windows inside the lounge, which means wherever you are seated, you’ll have a magnificent view. If that’s not enough, here’s a peek at some of the libations and nibbles available to enjoy!

This is one of the drinks from the Cityscape’s signature cocktail menu (drinks all named after areas in San Francisco)––the Mission: Maestro Dobel Diamond Tequila, St. Germain, ruby red grapefruit, and lime. Other selections include a Russian Hill: Stoli Elit Vodka, Cointreau, white cranberry, and fresh citrus, a Pacific Heights: Hennessy VS Cognac, Cointreau, squeeze of lemon, a Noe Valley: Tito’s Vodka, Aperol, lemon, agave nectar, splash of Prosecco, just to name a few. The full offering of specialty drinks as well as a list of wines and beer available can be found here.

The media group and I also previewed the Cityscape‘s menu of small plates, designed especially to be enjoyed with the signature cocktails. The appetizers were all neatly arranged on a shelf and we were encouraged to sample all of them and as many as we wanted.

A Cheese and Charcuterie Plate with Beet Pickled Egg, Quince, Grain Mustard, Olives, Black Garlic and a Selection of fine Meats and Cheeses. 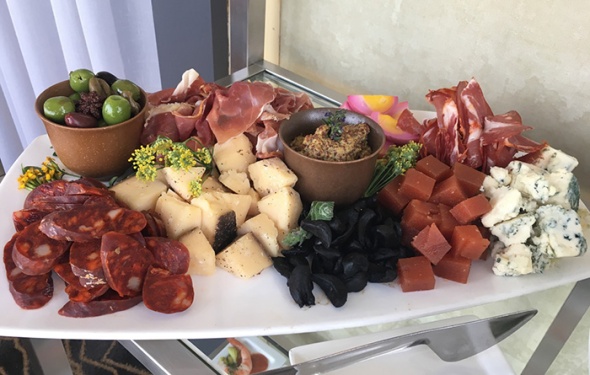 Chilled Prawn with a “Cioppino” Cocktail Sauce and Citrus Gremolata

I brought Catherine Enfield of Munchie Musings as my guest and it was a fab Girls’ Night Out. The bonus of the evening was parking the car and never leaving the hotel, so in a way, it was actually a Girls’ Night In! 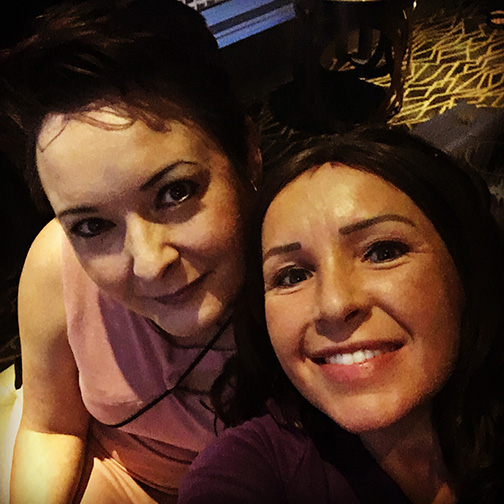 The photo below is a shot of the suite on the 26th floor (also inside tower one), where the Hilton was kind enough to let me stay for the night. There is a balcony outside the room and a fairly large patio with outside seating to enjoy the views (also incredible at a 26th floor level). I can’t wait to go back and spend the night there again!

The next morning, Catherine and I enjoyed the breakfast buffet at Urban Tavern, located on the lobby level of the Hilton. Below is a You Tube video of items available (everything!) on the buffet. I was really impressed by the Congee bar with several toppings, as well as the availability of healthy items. (There’s also lots of pastry, cereal, bread, bagels, too, if that’s your thing.)