Forgive the RBF (resting b*tch face) in the photo. Quite honestly, I’ll never forget how happy and excited I was when I took it. It was taken in our hotel room at the SLS Las Vegas, right before we left for the Mon Bel Ami chapel for our ceremony. Andy was in the bathroom and I had just finished getting ready myself. It was finally about to happen. I know, we’re on installment part three of the wedding in Las Vegas, and I still can’t believe it.

But first (a little earlier in the day) we had a little lunch with drinks at the Foxtail Pool and bar at our hotel. This lunch/drinking session was both the best and the worst idea ever. Why? Well…. we had this great drink (Absolut Frozen Lemonade) with vodka and lemon in it. It was probably one of the best drinks I have ever had. Best of course meaning overwhelmingly yummy and best also meaning highly intoxicating! Was it OK to get completely wasted before walking down the aisle? Probably not, but we kiiiinda did. And there was the great food we had with the adult beverage! I ordered the Ahi Poke Tacos and Andy ordered the Caesar Salad with Shrimp. 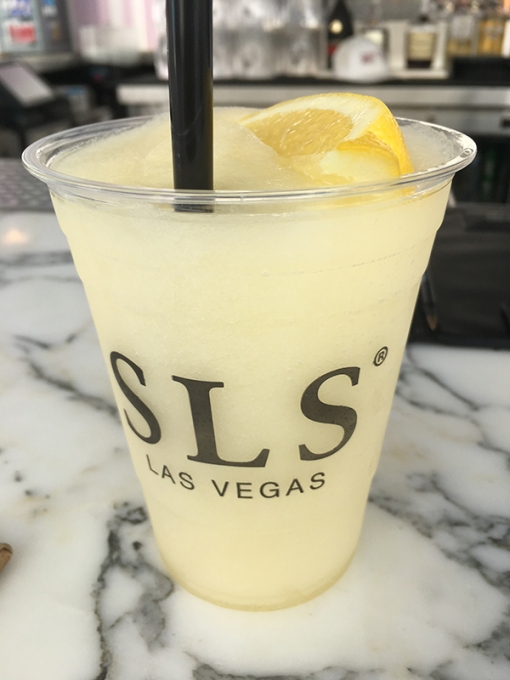 Oh those tacos, though! They had a yuzu crème fraîche and a truffle soy sauce. Yes, I think everything in Las Vegas has truffle or truffle flavoring involved. 🙂

After our lunch, we headed back up to the room to nap. Though, I don’t think I napped because I had to start getting ready for the ceremony. I gave myself SO MUCH TIME because I wanted my hair and makeup to be perfect. I decided on my Amore Brittany in Medium Brown, and decided to set her the night before in foam rollers.

I remember being very nervous, only because I thought something might go wrong. I was completely ready to get married to Andy… just super concerned about my dress, hair, makeup… then also worried about the place where we had chosen to get married… was it going to be as nice as it looked online? Was anyone going to be there to marry us when we showed up?

Yes. There were people there when we arrived to the Mon Bel Ami. Fun fact: The chapel is located about 3-3.5 blocks away from where you have to go to get your marriage license. We took care of that the day before, though. 🙂

Here’s a look inside the chapel at Mon Bel Ami in Las Vegas. It was just what we needed to get the job done! A big thanks goes out to the staff at the Mon Bel Ami. They really made everything perfect for our special day.

And in case you missed it (HINT: you did because it was just the two of us!!) Here’s the ceremony itself: 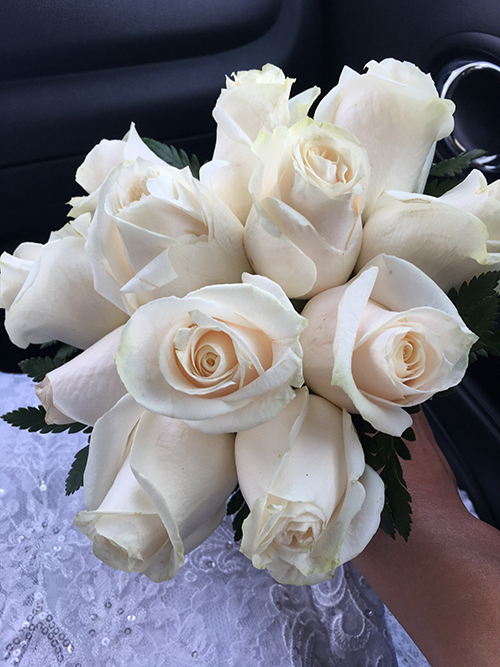 My bouquet that was included in the wedding package we bought.

And that was it! We were married and now on to more important things! Like EATING DINNER! 🙂 Seriously, though, I remember sitting in the car after the ceremony and taking a deep breath and just feeling joy. And taking note of that feeling so that I could remember it forever no matter what happens.

We decided to celebrate/have dinner that night at Top of the World in the Stratosphere Hotel. I mean, why not wear your ceremony garb and have your wedding dinner rotating 844 feet in the air!

On the way to the restaurant (in the lobby and casinos of the Stratosphere) people saw us (obviously by our clothing just married) and called out to us/cheered to us their congratulations. It was a beautiful scene! One man even stopped us to take selfies before we took the long elevator ride up to the restaurant. I wish I knew who that guy was… I would have loved to see those pictures.

Speaking of pictures, I took so many from our table, but here are just a few of the view (followed by a rundown of what we had for dinner). 🙂 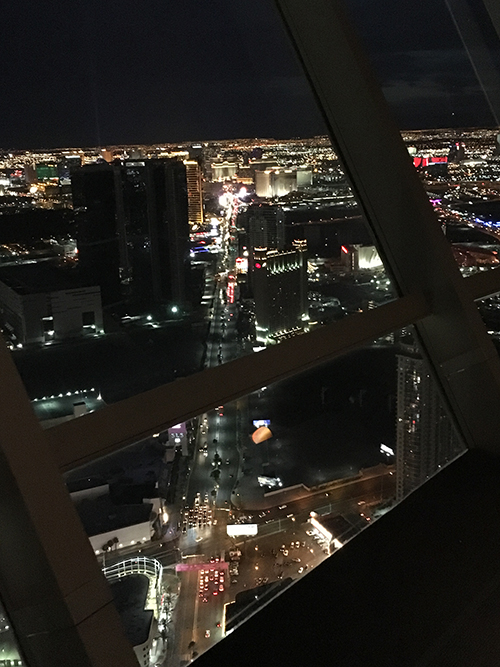 We were there just before the sun started to set and I believe we were able to go around almost 3 times and see the 360° view of Las Vegas. It was just stunning. And Andy looked stunning…

More deep breathes. This man is my husband now! I can’t believe it! This calls for bubbly! And not just any bubbly, but Champagne in an awesome looking bottle! 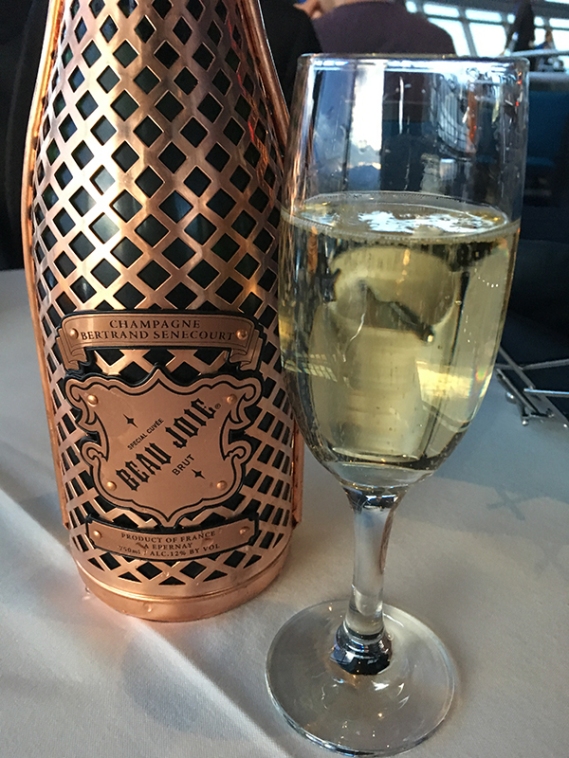 Our somm for the evening gave us excellent service. He found out in about 2 sentences that we are two of the biggest wine geeks around, so he stayed at our table for some time to chat. I hope we go back someday and see him again. 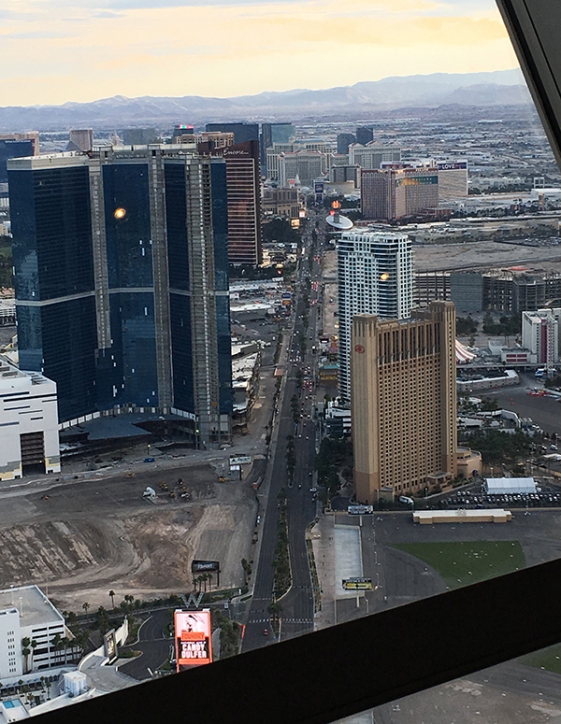 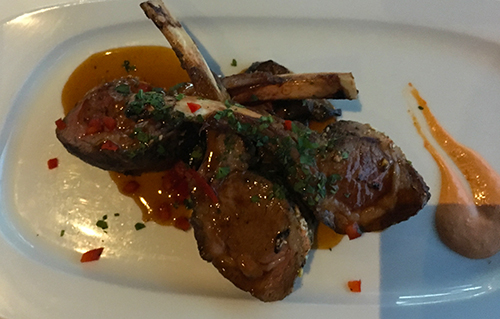 I am pretty sure we stuck with the bottle of Champagne and then had wine by the glass. Andy ordered this mango sorbet for dessert. The red object in the glass is actually plastic, not isomalt (ingredient used in cake decorating). 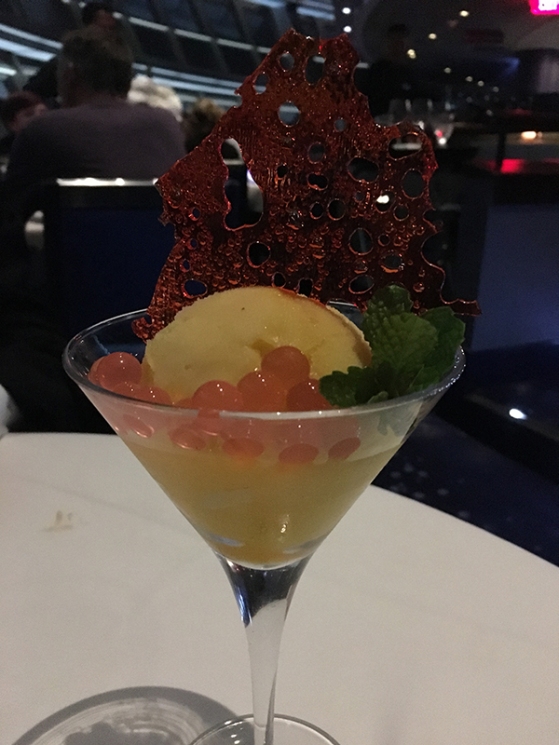 We also snapped a few pictures of each other during dinner. What a handsome guy!

Ready to dive into some chicken!!

That ring looks so GOOD on him! 🙂 This was taken AFTER I tried to eat the plastic thingy that was indeed NOT sugar or isomalt. 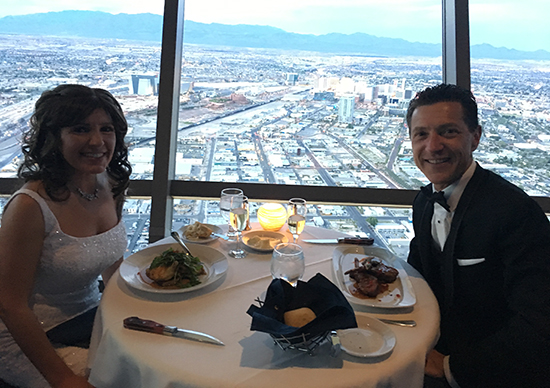 And I took this photo of me right before bedtime. What a perfect, beautiful, sacred, day! And the best part is there are so many more to come. We decided that day we would come back to Las Vegas every year on our anniversary because it was just so much fun and so memorable. 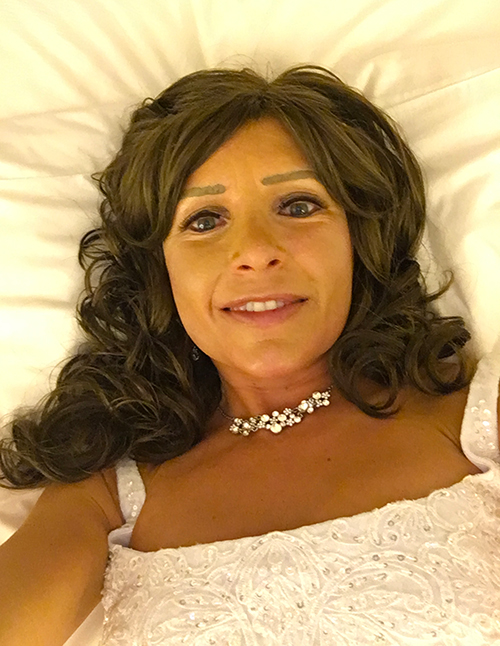 And that’s it. We closed the door to our room at the SLS Hotel the next morning and this is the parting shot. See you next year!

And they lived happily ever after…

This entry was posted on August 24, 2017 by cavegrrl. It was filed under Uncategorized and was tagged with Champagne, Las Vegas, Mon Bel Ami, Stratosphere, Top of the World, wedding.