So, if you haven’t been to the Hyatt Regency Sacramento recently, you must swing by and take a peek!

A little party was held there last night to celebrate the newly renovated lobby, lounge, Vines Restaurant, second floor meeting space, 12th floor suite and the amazing 360 degree view of the 15th floor Capitol View Room. I felt like one of the luckiest girls in the world–sipping wine at the top of the Hyatt with my sweetie, and taking in the absolute best view in town of Sacramento and the State Capitol. 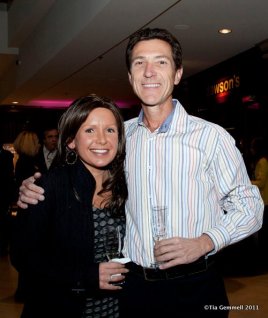 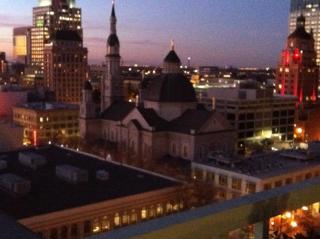 The Hyatt Sacramento applied for and received a Hyatt Community Grant
which nominates and honors local non-profit organizations for funding
built around the Hyatt’s philanthropic pillars–Environmental
sustainability, education and personal advancement, economic development
and investment or health and wellness. Hyatt Sacramento is one of only
27 Hyatt properties worldwide to be recognized to receive a grant. Their
nominated non-profit organization, the Stanford Settlement Neighborhood
Center received this honor and a $15,000 check at the event. KCRA’s footage of the new space is here.

Another reason to check out the Hyatt? It’s Dine Downtown week through January 18th, and Dawson’s Restaurant is one of the participating restaurants. You can check out their menu here, and make a reservation on Open Table here.

Built in 1988, the Hyatt Regency Sacramento was considered a key pillar in the redevelopment of the central downtown business community and a vital part of the future of Sacramento’s tourism industry.

Pictures of guests were taken by Tia Gemmell. You can see her full set of photos here.
Snaps of the view from the top were taken with my iPhone.

Sacramento’s Dine Downtown Week: Mayahuel and the best steak ever!!

Hello Sacramento! Welcome to Dine Downtown week! I just want to take a moment of your time to recommend a restaurant that might not yet be that well known. It’s called Mayahuel (pronounced Ma-Ha-Kwell) and it’s located diagonally from one of my other favorite restaurants, Ella. You’ve heard of Ella, right?
OK, well back to Mayahuel and Dine Downtown. It starts today and you must try this restaurant. First, they brought out this soup. It was made with nopales, and a little on the spicy side. It was kind of like an amuse bouche.

During this time, the BF and I made our wine selection for the evening–yes, you can get decent wine in a Mexican restaurant–the Napa Toro Chardonnay. Feel free to like them on Facebook now. 😉 Because it was actually pretty good wine.

I have to give a shout out to our server, Franscisco. He was the epitome of service. So polite, and so genuinely kind.
After meeting us, he presented the two appetizer choices from the Dine Downtown menu. First, was the Eclipse de Sol: it was composed of beets, orange rings in a citrus sauce with pickled onions, peanuts and a touch of oregano.

And now, for the stunning entrées. And I am not kidding here, they WERE stunning. I was so blown away with the flavors, the amount of food on the plate, and how perfect everything was cooked. 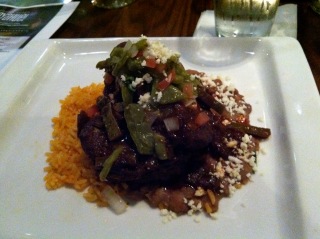 First, my BF ordered the Mixiotes de Pollo en Adobo Huasteco: Chicken and mushrooms with nopales in a Cascabel & Pasilla chile Adobo sauce, served with white rice and Mexican zucchini slices. The chicken was super tender and the sauce was mild, yet incredibly flavorful. As you can see, the portion was very generous. The wine we chose previously (the Napa Toro Chardonnay) was a great complement to this dish. 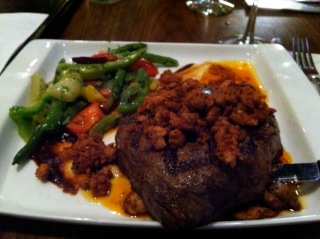 And then, let me present to you, the best steak I have ever had in a restaurant, the Ojo de Costilla con Costra de Chorizo Rib eye steak with a chorizo crust, on a bed of seasoned mushrooms in an adobo salsa. I was literally cutting my steak with my fork. It was exquisite, and I am not exaggerating. If you only try one thing off the menu at Mayahuel, please give this a go, (order it rare or medium rare). It will knock your little stockings off! I didn’t even mention the chorizo. It was so flavorful and added another dimension to the meal. 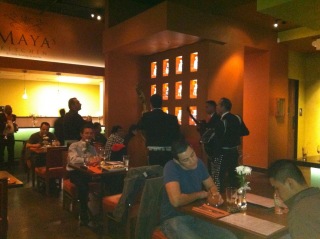 And then out came the mariachi band… they were wonderful and the crowd was loving it. I was so pleased to see the restaurant packed around us and everyone was in a convivial mood.

Then it was time for dessert. First, our server Francisco, brought out the Pastel de Queso y Chayote (a Chayote cheese cake and mole in chocolate sauce). Mole is a perfect addition to a dessert because of its components and texture. The chayote works in the dessert because it’s a squash and has an inherent slightly sweet taste and tender texture. That being said, I don’t think you’re gonna find this at the Cheesecake Factory, folks, only at Mayahuel! (Thanks to the BF for tasting the sugary treats).

The other dessert option was the Flan de Chile Ancho. It was a flan made with ancho chiles of all things, and finished with Grand Marnier. It has a beautiful strawberry and blueberry garnish. The BF tells me the combination of the ancho and the Grand Marnier was uniquely flavorful.

So, not only do you get the food I just showed you above, but for the $30, included at the end of the meal, is the 1/2 ounce tequila tasting. Our bartender, Oscar, was extremely knowledgeable and passionate, and had a true encyclopedic knowledge of tequila.

The tequila we tried was the Jose Cuervo Platino, and it was served in a champagne flute in order to provide the best tasting experience. It’s truly the stemware that makes all the difference in a tasting. It can really bring out the oaky and fruity notes of a particular wine or beverage. What a nice little digestif, and it was such a treat to get some background information on tequila from Oscar. 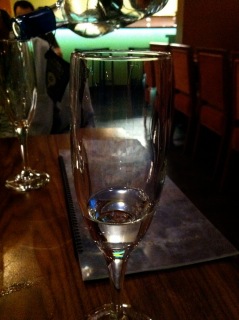 If you haven’t been to Mayahuel Tequila Museo, you are missing out on a true downtown gem. Dine Downtown week kicks off Monday, January 9th and runs through Wednesday, January 18th. This event is a great way to try out some of Sacramento’s finest.
Mayahuel is on Facebook here and on twitter here. To make reservations, you can call them at or check them out on Open Table here.

Sacramento’s Dine Downtown week kicks off on Monday, January 9th and runs through January 18th, 2012. For 10 days only, local chefs will create special three-course dinner menus for only $30 per person.

“Whether you’re a foodie, experienced restaurateur or someone looking for a little excitement in your diet, Dine Downtown is a great reason to venture out and dine at variety of restaurants that you wouldn’t normally try.” said Megan Emmerling of the Downtown Partnership. “From fine dining restaurants to casual neighborhood spots, we love seeing the participating restaurants flourish during the 10 days of Dine Downtown.”

Last night, I was fortunate enough to preview the menu that Chef Jason Lockard has created for Blue Prynt Restaurant. Before I even show pictures or describe the dishes, I can tell you that the amount of food you get for $30 makes Blue Prynt a steal. Also, it was a lot of fun to go to a place brand new to me, and to see that their menu was widely accessible to people on different diets.

To begin our meal, we chose the St. Supery Élu, and chatted about the wine with our server Gary (bonus points to Blue Prynt for knowledgable waitstaff). The evening was already off to a great start because the BF and I love to talk wine!! The Élu is a blend of Cabernet Sauvignon, Merlot, Cabernet Franc, Petit Verdot and Malbec, and was an excellent choice to pair with the main course that was to come.

I wanted to mention that if you opt for the $30 prix fixe, you’ll also get big basket of warm garlic bread. My BF and I are gluten-free, so we passed on it in order to leave room for the other courses.

The BF ordered the oysters on the half shell, served with a spicy Thai dressing…

And I ordered the shrimp cocktail, lemon poached jumbo prawns served with a fresh grated horseradish cocktail sauce. I didn’t eat a lot of the sauce, because I love fresh seafood by itself, but I really liked that kicked up horseradish flavor!

Now do I have your attention? 🙂

Not only did the prix fixe option include bread and an appetizer, we also had a salad/soup option.
There is a seafood chowder on the menu for a soup choice, but I went with a Caesar Salad, and BF went with a spring mix salad with dill and caper dressing.

For dinner we both ordered the “King of New York”, a 12-ounce choice cut strip loin with a crown royal and royal trumpet mushroom chasseur sauce, and served with blue cheese mashed potatoes and green beans. The mashed potatoes aren’t truly allowed in my diet, but I still had a few bites of them to try. I really loved the incorporation of blue cheese. I boxed the rest up to make room for the thick cut of steak on my plate! Beef and mushrooms is one of my favorite flavor combinations. So classic and never goes out of style, so good move by the Chef to include it on the Dine Downtown menu. Also, I want to explain that we each got a full entrée for our main course (one 12-ounce strip each) and did not have to share this plate. The BF polished his entire meal off Adam Richman style, but I don’t think I made it through 5 ounces before I threw in the towel.

We also ordered the same thing for dessert (chocolate covered strawberries), so this picture represents what one person receives. We took the other portion home to enjoy later with The Improviser.
The Dine Downtown menu kicks off Monday, but why wait for that? Head into Blue Prynt for dinner tonight. They have a great mix of art on the walls, and even have Chimay on tap!
Also, there is a Gin Tasting coming up on February 3rd for $12, as well as a Crab Feed on February 11th ($35 for all you can eat.) And if you want to just swing by after a long day at the office, here’s a link to their Happy Hour menu.

For a full list of the Dine Downtown participating restaurants and their menus, you can click here.