I’d like to start this post with a big thank you to Tropical Traditions. They sent me a huge jar of coconut oil to try out in my Paleo recipes. I ended up using it in the Paleo Gingersnaps that I used to crumble up and coat the ham below. Here’s a picture of their product. It’s not only good in cooking (use it in the place of –and in the same ratio as–any butter or oil), but excellent as a moisturizer!

So look at the crusty beast below! Can you believe it is gluten free? 🙂 This Gingersnap Crusted Ham was a “side” for our Paleo Easter Meal. I snagged the idea for it from the Alton Brown recipe I first made years ago.

What You Will Need:

One 2 pound”City” Ham (I used an Uncured, Nitrate Free, Hormone Free, Vegetarian Fed Ham)
You will find that 2 pounds of ham is actually only about 1/4 of a normal sized ham. 🙂

2 Cups Paleo Gingersnap Crumbs (To get the crumbs, you have to make the gingersnaps themselves.)

Preheat oven to 375 degrees.
In a medium sized mixing bowl, combine dry ingredients (including lemon zest).
In a small mixing bowl beat eggs, honey, molasses, and vanilla extract with a hand mixer.
Pour wet ingredients into dry and beat with hand mixer until combined.
Add coconut oil into batter, and continue to blend until combined.
Press the dough out flat on a parchment lined baking sheet, about a tablespoon in size. Bake cookies for 15 minutes at 375.

Let cool completely then break the cookie into crumbs and set aside.

1. Place the ham in a glass baking dish and paint the dijon mustard on it with a pastry brush.

2. Then take the gingersnap crumbs and coat the ham until it is completely covered in crumbs.

3. Spray the ham with the bourbon to seal the crumb coating.

4. Bake the ham in the oven at 350° for about 10 mins, then take out the ham and lightly spritz the it with more bourbon. Return the ham to the oven and bake it until the crust is golden brown, or if you are like me, you can get the crust a little more brown than that. Let rest about 5-10 mins and then carve to serve. 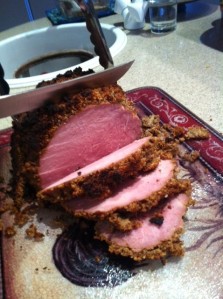 Dining out can be a little tricky on the Paleo diet. Standard restaurant menus are a gauntlet of gluten, sugar, and dairy laden dishes, not to mention the cheap seed oils that are used to prepare them.

The above slide show is from a restaurant at which my Paleo partner and I dined called Coyote Bar & Grill.

In the title I say, “Speak up!” because in order to stick to the principles of a gluten-free, sugar-free diet, you are often times going to find yourself in need of certain menu substitutions to make restaurant meals work best for you. And THAT IS OK! You are the customer, and you are paying for your meal. You should enjoy it and not fret about what the server or the chef will think of you if you ask for something special.

Of course, substitutions and modifications might not work so much in a chain restaurant (especially fast food) because food is not made to order), but typically most restaurants are glad to accommodate a customer with special dietary needs. Especially if they ever want to see that customer ever again.

When we dined at Coyote, we were very hungry from running in the Carlsbad 5000 5K race. Directly after the race, my boyfriend had conquered a half chicken at Pollos Maria, but it was 4 hours later, and his appetite had come back with a vengeance. And I was ready to eat, too, after running harder than I ever have in my entire life.

For our appetizer, we ordered the “Guacamole Especial”, which on the menu is listed as “homemade guac, cheese, salsa fresca, tortilla chips”. All I had to do was ask if they could substitute some sort of raw vegetable for the tortilla chips, and please leave off the cheese. They were very agreeable and the BF and I were able to enjoy a perfectly Paleo prelude to our entrees. 🙂

For my main course, I ordered the Grilled Seafood Salad: Grilled scallops, prawns, fresh fish, mixed greens, Feta cheese, tomato, baby corn & Lemon-Cilantro Vinaigrette. To make it Paleo, all I had to do was ask the server to leave off the dressing, and I picked around the cheese and the baby corn. Everything else was perfect!

BF ordered the Grilled Salmon and asked for double grilled vegetables instead of the wild rice. The dinner also came with a mixed greens salad. We also ordered 4 shrimp skewers ala carte. After my salad, I could only eat one of them. I also wanted to note that instead of dressing, I often mix in guacamole into my greens. That way I avoid sugars and soy oil blends (often GMOs) that are notorious ingredients in salad dressings (even house made ones).

So, remember when you go out to eat, you’re in the driver’s seat. You can choose where to go and several details about your meal (in many cases down to how it is prepared). Don’t worry about being a pain if you ask for something that’s not exactly spelled out on the menu. Ask how things are prepared and stay away from adjectives like “breaded, fried”. Words such as “grilled, raw, steamed” are your new best friends!

Happy dining to all my Paleo friends out there!

PS: If you have any Paleo/Primal dining tips/tricks please feel free to share them below! 🙂 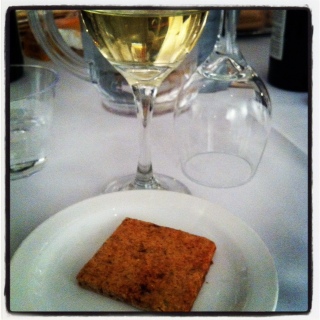 Last night was one of my favorite nights of the month, wine tasting night (with a local wine group to which I belong) at the Barton Gallery (next to Michaelangelo’s Restaurant.

Typically, we each bring a bottle of wine (based on a theme we decide ahead of time for the month) and a dish (if we can) to share. This month was sort of a competition to choose the themes for the next three months, so we brought bottles to vote. The very best as decided by the group would win the themes for February, March, and April.

Some of varietals, regions, themes present last night were: Alsace, San Luis Obispo, Barbera, Barbaresco, Tour of Italy, Rare Italians, and the Middle East. We decided that next month’s theme would be Alsatian Wines, and it was an easy decision after we tried an Alsatian Riesling (C and R brought, the Domaine Gresser Riesling, Alsace 2007 to be exact) that had all the great characteristics of a Riesling, such as clean, bright, and crisp, without being sticky and cloying.

I brought these Rosemary Date Crackers to the tasting because I wanted to make sure there was some sort of cracker/snack I could eat once I got there. I do sometimes get weak and miss bread/crackers at wine tastings, but these crackers were way more flavorful than store bought. The original inspiration came from Elena over at Elena’s Pantry, but I have changed it up quite a bit. Enjoy!

(Tip: Make your own with raw almonds and a food processor)

(Tip: If you use dried, you can grind up with a mortar and pestle to release the oils.)

3. Mix in egg, butter and oil until well combined. It’s really best if you dig in and mix with your hands.

4. Roll out the mixture between parchment paper with a rolling pin.

5. Cut dough with pizza cutter, or for fun, you can use little cookie cutters. I left the rolled out pieces right on the paper and placed the paper on a cookie sheet to bake.

7. Bring to wine tasting and people will love you for them. 🙂

One of my Favorite Kinds of Cake: Meat Cake (and it’s gluten-free)!!