Hot off the Grill: 2012 Sacramento Burger Battle is September 18th at Raley Field 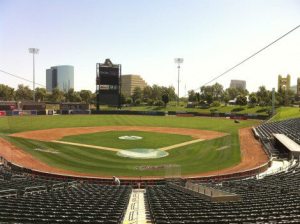 Of course, the organizer of the event is a friend of mine, so I have had the privilege of knowing all about the event for a few months now. I was particularly interested in helping promote this event because all of the ticket sales benefit the Crohn’s and Colitis Foundation of America. I was diagnosed with Crohn’s in 2001. Though my Crohn’s is in remission and it rarely bothers be (due to my diet and exercise regime), I know there are many people who are hospitalized and operated on every year (and even die) from Crohn’s Disease.

The Battle Details:
Up to 15 Sacramento-area restaurants will create their best burgers in the hope of being named the Best Burger in Sacramento.

Audience Participation!
Attendees can sample burgers from participating restaurants and vote for their favorite burger to receive the People’s Choice Award.

Not Just Burgers!!
Featured entertainment includes a live art installation by the nationally acclaimed Tekstartist from Carlsbad, California. The final piece will be auctioned off during the event to raise additional funds for the Crohn’s and Colitis Foundation of America.

Fine Print:
Admission to the event is limited to adults 21 and over.

About the 2012 Sacramento Burger Battle
Conceived by Rodney Blackwell, a nationally ranked burger blogger based in Sacramento, California, Sacramento Burger Battle’s purpose is two-fold: to showcase the local dining scene, and to raise money for the Crohn’s and Colitis Foundation of America. Blackwell’s commitment to helping find a cure for Crohn’s and colitis started four years ago, when his daughter was diagnosed with Crohn’s.

Ready to buy tickets? You can get them online here!

This entry was posted on July 24, 2012 by cavegrrl. It was filed under Uncategorized and was tagged with burgers, contest, events, fun, fundraiser, Raley Field.