Looking forward to seeing 42nd Street this weekend! Here’s a press release from my friends at Runaway Stage Productions. -cg 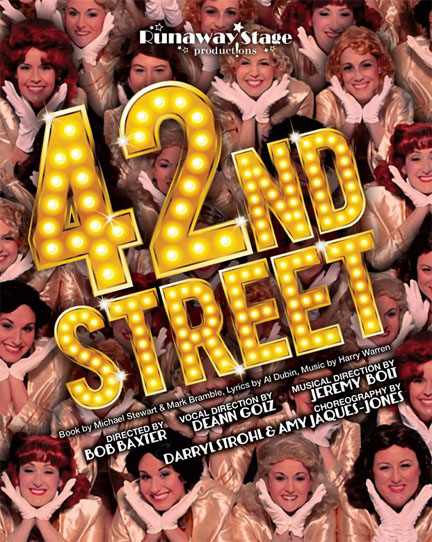 SACRAMENTO – Come on along and listen to the lullaby of Broadway with Runaway Stage Productions as RSP presents the classic comedy musical 42nd Street, playing April 12 to May 5 at the 24th Street Theatre, located at the Sierra 2 Center.

Based on the classic 1933 movie musical of the same name, 42nd Street tells the story of naive young actress Peggy Sawyer who arrives to audition for the new Julian Marsh extravaganza, set to open on Broadway with aging leading lady Dorothy Brock. A classic backstage story, 42nd Street is a delightful throwback that the entire family will enjoy. The 1980 Broadway production won the Tony Award for Best Musical and became a long-running hit. The show was produced in London in 1984 (winning the Olivier Award for Best Musical), and its 2001 Broadway revival won the Tony for Best Revival.

“RSP has waited to do this show until the talent was ready, and boy is it ready,” RSP Producing Director Bob Baxter said. “The cast is unbelievable, the dancing (tap, ballet and jazz) is breathtaking. I am excited watching the rehearsals, and I know the audience will enjoy the show!”

Jeremy Bolt directs music, with vocal direction by Deann Golz. They lead the RSP resident orchestra with a score that is full of famous musical numbers, including “Young and Healthy,”  “You’re Getting to be a Habit with Me,” “Dames,” “We’re in the Money,” “Lullaby of Broadway,” and, of course, the iconic “Forty-Second Street.”

You can find Runaway Stage Productions on Facebook here.

This entry was posted on April 12, 2013 by cavegrrl. It was filed under Uncategorized and was tagged with events, live music, musical, Runaway Stage Productions, sacramento, Sierra 2 Center.