May is Celiac Awareness month and Mikuni Sushi has created a special Gluten-Free menu for people seeking to avoid wheat.

Celiac disease is an autoimmune disorder triggered by the ingestion of gluten, a protein found in wheat, barley and rye.  An estimated 1 in 141 Americans has celiac disease, yet 83% of those who have it are either undiagnosed or misdiagnosed.

The demand for gluten-free food has skyrocketed in the past few years, I think as a result of more being discovered about Celiac’s and NCGS. Also, many diets have shown increased weight-loss results by cutting back on wheat or cutting grains out altogether (as we do in the Paleo diet). Let’s face it. It’s hip to be gluten-free, and if you manufacture a product that contains wheat, it’s a great idea to have a gluten-free alternative.

Also, I am of the belief that eating rice is ok in moderation or as a treat. Andy and I might eat at a sushi restaurant once every couple of months, and sometimes we eat rolls/dishes with rice in them and sometimes not. 🙂 I wanted to showcase a variety of dishes with and without rice, even if not completely Paleo.

I sat down with the Executive Chef of Mikuni (Midtown), Daniel Schmoock (who is heading off to Japan this weekend to keep up-to-date on the latest food trends happening in the Far East) to talk about the gluten-free menu and its development. Chef Daniel has been with Mikuni’s for about 15 years and began his tenure with the restaurant group at the Fair Oaks location.

It turns out the gluten-free menu was born from customer demand and a rather lagging economy. The challenge was to make the menu interesting and fun like some of the unique rolls on the established Mikuni menus. A lot of those rolls contain gluten because they have tempura shrimp or vegetables in them. Chef Daniel told me it was also tricky because some of the ingredients used in a normal menu (such us the fish roe or tobiko) had been cured in soy sauce that contains gluten, making the ingredient unsuitable for use in a gluten-free menu. One contaminated ingredient spoils the whole dish. Chef Daniel also commented on the labels of some imported products (frequently used in restaurants) stating that some ingredients are not always entirely listed.

Before our chat was over, he recommended a few of his favorite dishes on the gluten-free menu–The Aerojet Roll and the Gluten-Free Kyushu Hamachi–for us to try first.

The Aerojet Roll contains hamachi, tuna, avocado and rice, wrapped in cucumber and a soy wrap. 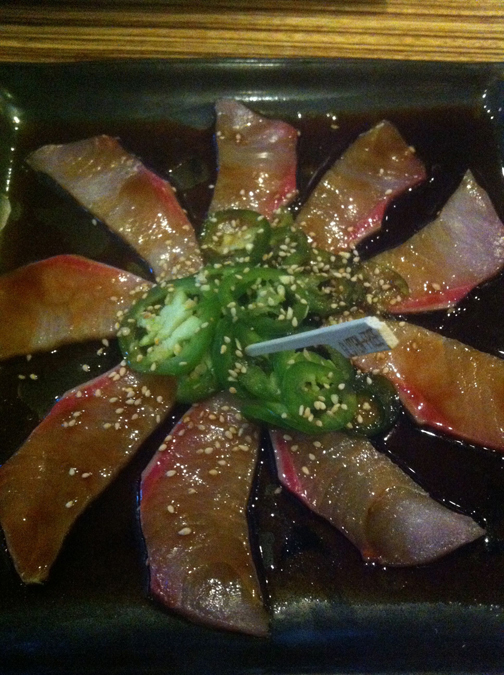 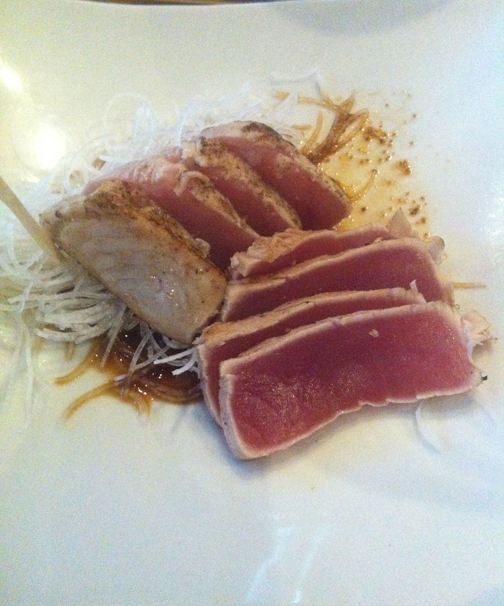 Probably the most Paleo item on the menu: the Gluten-Free Sea Steak: Seared rare tuna in Mikuni shichimi gluten-free soy dressing on top of daikon radish with sesame seeds. I could probably eat this “allday errrday” and not tire of it. 😉 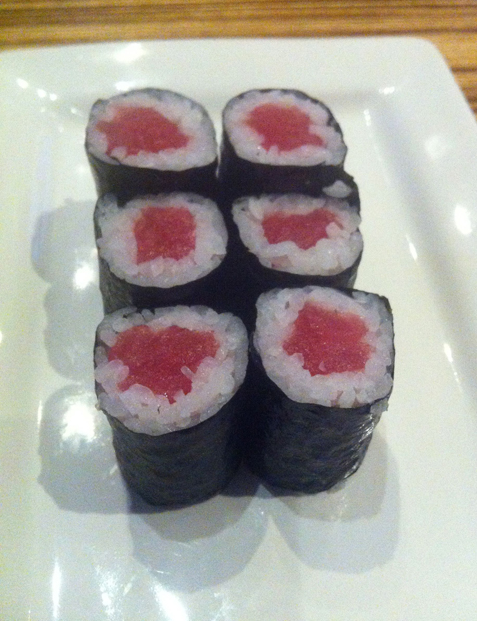 I ordered this roll, the traditional Tekka Maki (tuna roll) because it’s on the regular menu, too. And, it’s just plain good.

For our last dish, we ordered the Gluten-Free 3 Roll. There’s ebi, fresh salmon, hamachi, tuna, and a little wasabi inside a soy wrap. This was my favorite dish besides the Sea Steak!

There are several other creations on the menu including nigiri and sashimi options, a few other rolls (1,2, and 4 in addition to the #3 we tried) as well as a few salads, gluten-free miso soup and there are non-raw options like Gluten-Free Shioyaki Salmon, Teriyaki Salmon, Teriyaki Chicken and Teriyaki Beef.

On June 1st, the “Oh Snap, Let’s Eat! Mikuni Photo-a-Day Instagram Contest” begins. Each day of June, there will be a theme (like “This is How I Roll” or “Chop it Like it’s Hot”) and a daily prize. To enter, you’ll need to follow @mikunisushi on Instagram and post a photo that best represents the theme of the day with the #mikuniexposed hashtag and mention @mikunisushi. There are no limits to the number of entries per day and you can be as creative as you like!

I also wanted to point out that Mikuni even offers a Karui (Lite) Menu featuring Mikuni dishes that are 500 calories or less, but are not necessarily gluten-free. It’s great to have so many choices. I love it that I could go to Mikuni and splurge with a deep-fried creation on a special occasion (like the recent Here We Stay roll), or just keep it lean on a normal day.

You can find Mikuni on Facebook here and on twitter here. Thanks to Mikuni Midtown for the inside scoop on the gluten-free menu and thanks to Chef Daniel for taking time out to sit down with us before our meal. 🙂

This entry was posted on May 24, 2013 by cavegrrl. It was filed under Uncategorized and was tagged with Celiac Awareness Month, chardonnay, food, Mikuni, sacramento, sushi, wine.