The Cabernet Gods looked upon St. Helena with a smile on their faces last Saturday. It was the setting of the Kathryn Hall Release Party, and the release of the Kathryn Hall 2011 Cabernet Sauvignon. The ticketed party was mostly held on the great lawn at HALL Wines, featuring several stations to taste wine and food from Feast Catering.

It was an honor and privilege for Andy and I to be guests of the party and to experience it amongst true Cabernet lovers and fans of Kathryn Hall.

I felt a bit like Alice in Wonderland in the Queen’s croquet garden, surrounded by the big red vinyl couches and the delights hidden behind the shrubs on the Great Lawn. 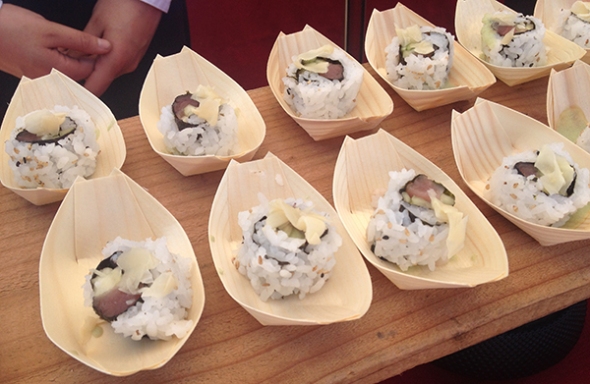 Upon arrival, we were greeted with a glass of 2013 Hall NV Sauvignon Blanc, and behind the first set of shrubs to the right of the entrance were these tuna and cucumber rolls with finger lime and wasabi in little wooden boats (pictured above). The next station we visited was even better, serving a chilled carrot soup with radish top pistou (pictured below). It was paired with a 2012 Walt “Dutton Ranch” Russian River Chardonnay. The soup was perfect for a very warm and sunny day and its flavor was amplified with a little curry and coconut. I was tempted to have a second. 😉 PS: Dutton Ranch is an excellent place of origin for a Chardonnay. Just google it and you’ll see what I mean. 🙂

Then the Bacon, Duck Fat, and Smoked Sea Salt popcorn happened! Actually, it happened just as Kathryn Hall herself officially announced the release of the 2011 Kathryn Hall Cabernet Sauvignon. Andy and I hustled to the nearest station pouring the newly christened cab to have a taste. AND THEN the fatty popcorn happened. 😉 It was made fresh in a large wok and served in little paper bags. I didn’t want to seem uncouth, so I took a small serving in a paper bag instead of taking the scoop and shoveling the delectable kernels directly into my mouth! 😉 Better than anything I had ever had at the movies!

Well, at least popcorn is gluten free… and for vegetarians, there was another flavor: A habanero, green onion, garlic, and chive concoction. And I think it paired a little better with the new Kathryn Hall Release because the Cabernet is still pretty young and stood up to the heat of the slightly spicy popcorn.

We also tried a different Cabernet: a 2011 “T Bar T Ranch” cab from Alexander Valley. I couldn’t say which is my favorite because I liked them for different reasons and asking me to pick a favorite is like asking someone to pick their favorite child, and I know you don’t want to do that to me. 😉

There was a DJ positioned just in front of the great lawn, and he kept patrons happy by playing some current tunes, but also many hits from the 80s. Thanks DJ Adam Bomb, you were great and loved by the crowd. Check out his website and his client list. Pretty impressive! 🙂

Then I visited the grape crushing station and contributed to the 2014 Cabernet. So, that’s a warning to all of you out there. My feet touched some of that juice. 😉 Watch and see! Here’s how you make great wine!

I was having a blast! 🙂 I still pinch myself sometimes because I think I am dreaming. This is the life I saw for myself 10 years ago. I wanted to be in the heart of wine country standing in the sun and sipping some of the best wine in the world!

Andy stayed out of the juice, and thank goodness…you don’t want to know where that guy’s feet have been. Just kidding. I think he just didn’t want to have sticky feet. 🙂 I am so happy I crushed those grapes. I will always remember how happy I was standing in that barrel! I think the only thing that would make me happier is being a judge at next year’s Cabernet Cookoff (also held at HALL Wines).

Man, all that grape crushing worked up my appetite… (ha, just kidding…) but we were looking for another little snack to try, so we headed into the workshop and dining area. It’s basically a full open kitchen with a dining area where patrons can see demonstrations of food being prepared. Today the culinary team were demonstrating how to make sopes.

They began by rolling out the dough (masa soaked in lime) into a ball and then flattening it into a disc with a little but of an impression in it. Then, post frying and draining the discs were filled with ancho chili rubbed carnitas with avocado tomatillo salsa, picked red onions & cotija cheese. They were muy delicioso!

Also in the workshop was a display and check out area where vintage Kathryn Hall Cabernets and large volumes were available for purchase. 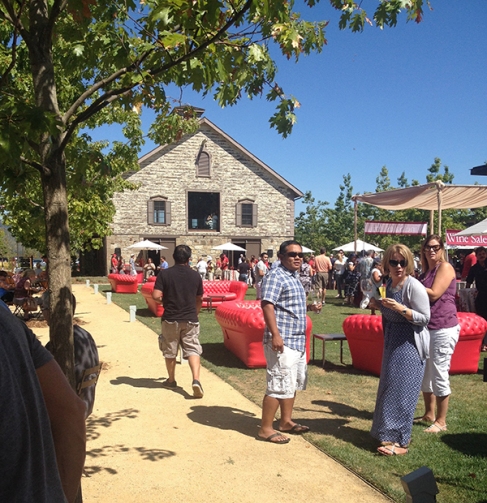 We did a little bit more walking around the great lawn, and went back to hang out with a new friend we made that day! His name is Spencer and he’s straight out of Louisville, Kentucky! 🙂 Congrats on your position at HALL Wines, and what a great place to be so young in your life. Cheers!

After we chatted with Spencer, we found Moroccan Lamb Lollipops with Pomegranate sauce! YAY!

I had a few of the meatballs, and they were spectacular just everything else I had tasted at the party. But, I had my limits, and was pretty full by this time. Andy and I decided to get one more taste of the new release before we left and we sat down at a table in the sun. This was his heartfelt thank you! 🙂

Along with Andy, I want to thank the PR team and social media folks at HALL Wines for making us feel like VIPs. We both had an incredible time. 🙂

Take a look at the fun other guests had by viewing the social media feed from the party here.