Dametra Café: Mediterranean Fusion at its Finest in Downtown Carmel 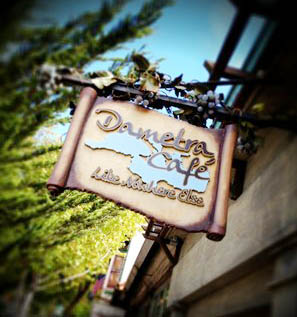 Faisal Nimri and Bashar Sneeh own what is currently the most popular restaurant in downtown Carmel: Dametra Café. 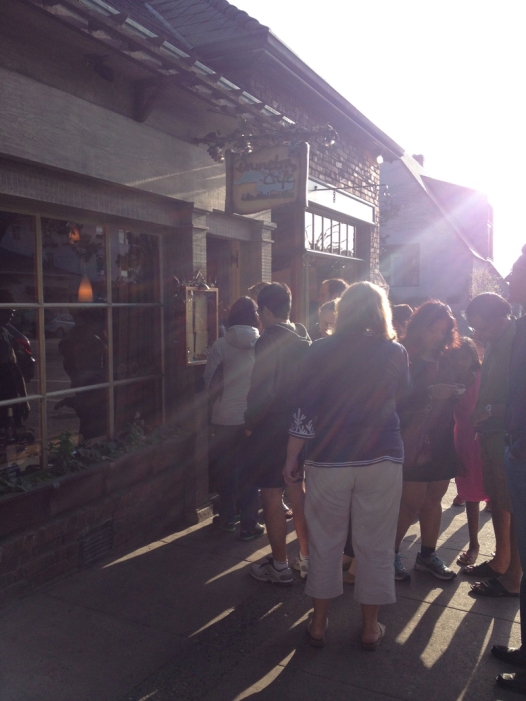 Since mid-2009, the restaurant has been booked solid (see above photo of line outside the door) for dinner every night, and after our meal there during our second night in Carmel, I can see why. When Andy and I walked into restaurant, we were greeted by Faisal and seated promptly. I thought that perhaps we were being given special treatment (as I had arranged our dinner with the Carmel Chamber of Commerce as part of our trip). But as I watched from our table, I saw him treating all the incoming customers this way––like welcoming a family member into his home.

The name Dametra Café (which opened in 2008) is a combination of their homelands: Damascus plus Petra (the ancient Jordanian city near the Dead Sea carved of rose-colored stone. By 2010, the Carmel Chamber of Commerce named Dametra Café Business of the Year. The Café’s menu is a delightful amalgamation of Mediterranean foods Nimri (from Jordan) and Sneeh (from Syria) loved during their childhood: spanikopita from Greece, calamari from Italy, smoked salmon from France and hummus from Lebanon.

Why did I want to eat here? I certainly did not know the 14 table restaurant was so popular until we arrived. Andy and I actually found Dametra Café passing by the restaurant on foot while wine tasting during our last visit to Carmel a year ago. I remember someone standing outside and beckoning us to come in for dinner (again, very hospitable). We had already made plans for the evening (Fandango in Pacific Grove), but vowed to return to the Café on our next visit to Carmel. We finally made it! 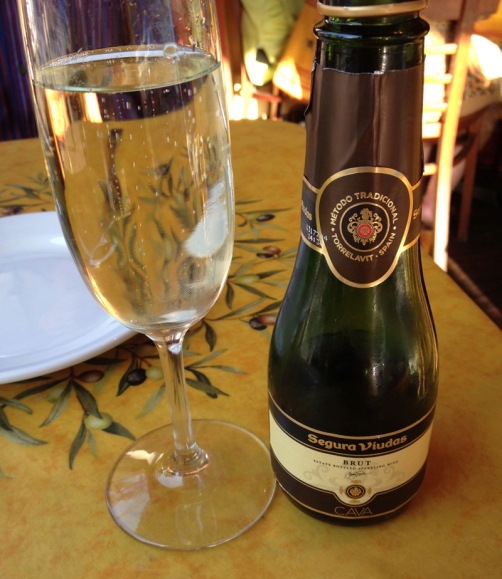 I kicked off my dinner with a split of cava, and Andy had a glass of Malbec (that’s one of his favorite varietals). 🙂 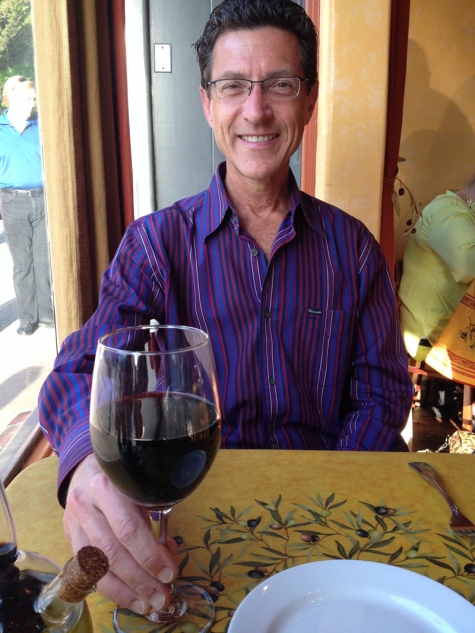 Then it was on to the meal! Since we had indulged earlier in our hotel’s happy hour, we stuck to wine by the glass instead of choosing a bottle of wine with dinner.I picked the Greek Combination Platter: Gyros, chicken kabab, humus, yogurt sauce, pita bread, rice and Greek salad. This is the quintessential plate to order if you have never eaten Greek food and want to sample what it’s truly supposed to taste like. I was in heaven, and ordered a glass of Tapena Tempranillo (Spain) to enjoy with it.

Andy ordered the Almond Crusted Halibut: a Pan seared wild Halibut filet with Prawns over sautéed spinach, topped with light cream sauce and rice pilaf. I don’t think I have ever eaten a more delicious piece of fish than the bite of halibut (yes, crusted with almond) that Andy shared with me. I kind of had entrée envy, even though I was very happy with my meal. I can still remember how perfectly cooked that fish was! I think Andy gets the prize for choosing the better dish this time… 😉 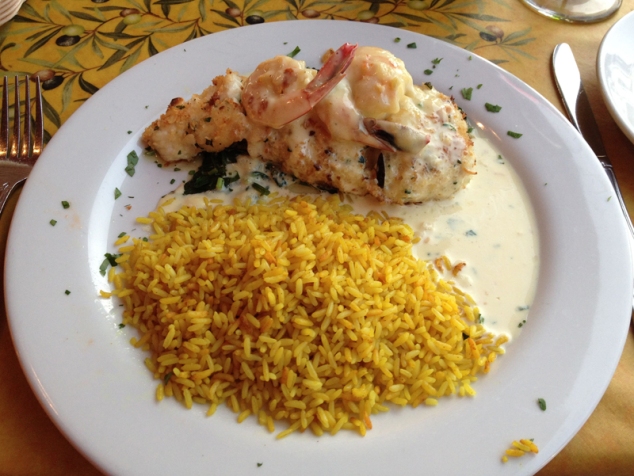 During the meal, one of the servers serenaded us and the other guests in the restaurant, accompanied by Faisal, strumming a six-stringed Greek oud. 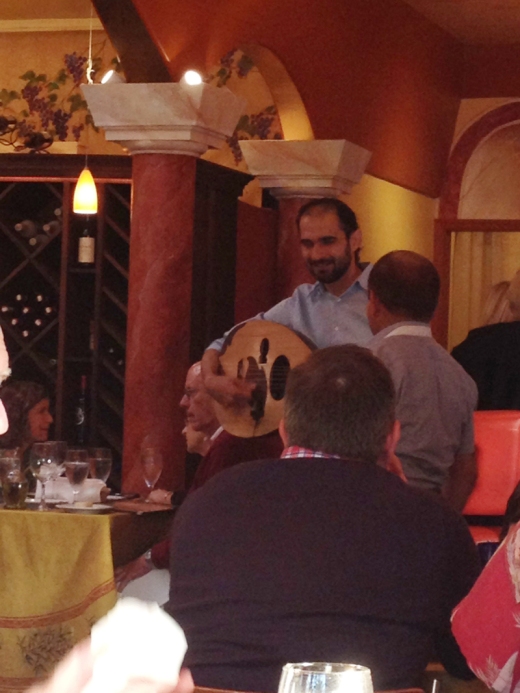 It was truly so much fun. As we left, we were greeted again with a sincere “thank you for coming”. Andy and I were more thankful to the owners and the staff for such a memorable meal and music. 🙂

Also, check out the video below featuring Dametra Cafe to really see inside the restaurant and how wonderful it truly is.

Return to Mundaka: A Spanish-Style Tapas Restaurant in Downtown Carmel

It was less than a year ago when we last visited Mundaka, a small plates restaurant nestled in the heart of downtown Carmel. Since then, the restaurant has continued to thrive and recently celebrated its 5th anniversary!

During our recent stay at The Vendange Carmel Inn and Suites Andy and I were honored to be invited back to Mundaka for dinner to try some new items on the menu, as well as some of our favorites from last time.

Please excuse the photos in this post. They are rather dark as was the room in which we were seated. 😉

We began the meal by ordering the Bravas: Fried potatoes, brava sauce, aioli. It happens to be one of the most classic tapas in Spain, and a must try at Mundaka. 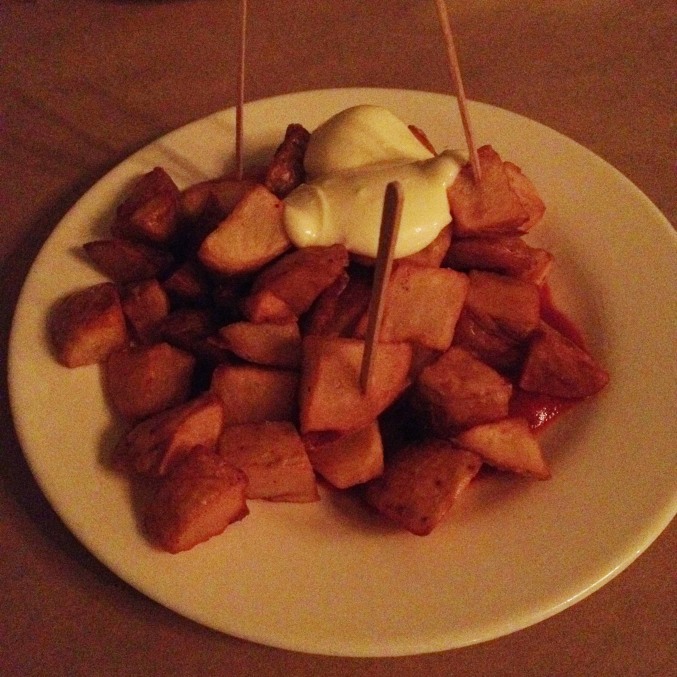 Of course the Bravas were excellent, but I think the Crudo was the first new thing on the menu that caught my eye. When the plate came out, I was surprised to see such a beautiful presentation of multi-colored julienned vegetables: Carrots, Brussels sprouts, beet purée, candied walnuts.

The juxtaposition to the Crudo dish was the Charcuteria! Time to get our fat on! The plate was composed of Serrano ham, Iberico sausages, house cured lomo. Slice upon slice of meaty goodness. And there was more to come! 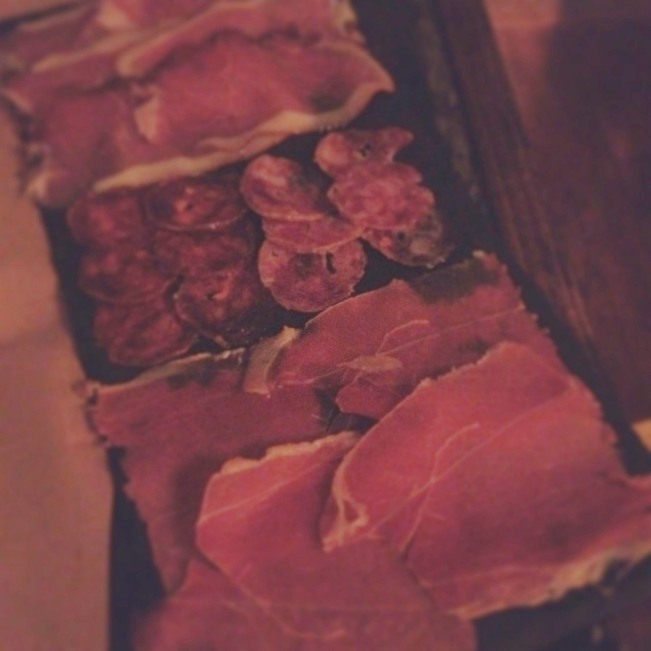 I guess you could say our main event was the Carne: Hanger steak, truffle fries, free foie butter. The hangar steak was tender and flavorful, and cooked a perfect medium-rare. The fries were the very skinny variety–like matchsticks, if you will–they soaked up the foie butter that had melted onto the plate from the steak.

Next up: A pan fried sole, salad of baby poached potatoes, grapefruit, arugula, saffron vinaigrette. This was probably my least favorite dish of all, but I still liked it, so that’s not much of a complaint. I just felt like the potatoes were a little clunky and didn’t belong on the plate with the fish.

By this point, we were getting full and decided on a few non-dessert items to close out the meal:

Dessert #1: Huevo: Fried duck egg, crispy Iberico bits, toast. It was such a simple dish, but the quality of the ingredients and the richness of the duck egg combined with the Iberico was very rich and indulgent. Highly recommended as a starter dish or for a grand finalé!

So maybe we worked backwards, but my one of my favorite foods is egg, so these plates were like dessert to me. If you’re more into sweets and coffee for your finalé, Mundaka has a dessert, coffee, and digestives menu, pictured below:

What to drink? Mundaka serves a “Party Wine” house wine (red blend) poured from a giant bottle for $5 a glass (if you don’t ask what is in the blend). We enjoyed 2 different cavas (one, a rosé) and switched over to the Party Wine later in the meal. (Below is a photo of the bottle of sparkling rosé that Andy ordered and the glass of cava that I ordered).

Mundaka is located on San Carlos Street between Ocean and 7th Ave and open daily from 11am-5pm for coffee/lunch/pintxos and open daily at 5:30pm for Tapas/pintxos. You can download a sample menu here. You can find Mundaka on Facebook here. You can make a reservation at Mundaka via Open Table here.

A big thanks to Mundaka for their hospitality during our second visit. Always a delicious and memorable meal! 🙂

To finish, a shot of my stunning dining companion. Love that guy! 🙂