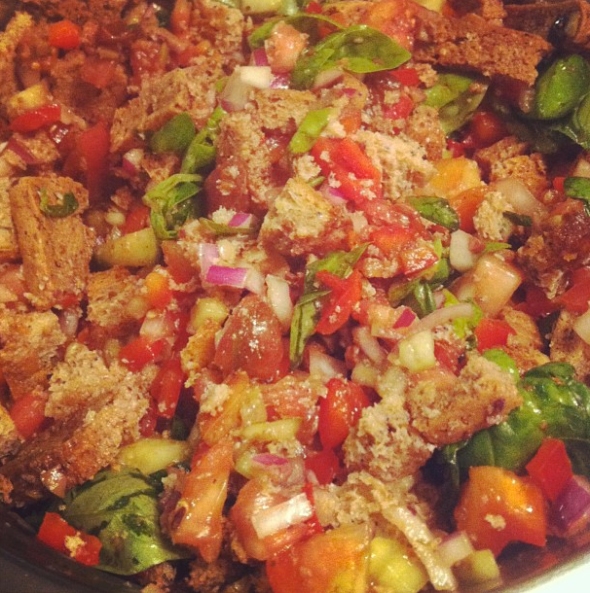 What do you eat when it’s this hot outside? Salad! This is a great meal for the current weather.
Since going gluten and grain-free, I have denied myself one of my favorite dishes: Panzanella Salad. I was surprised to find out that Andy had never had the salad before.The people at Julian Bakery make Paleo Bread, and they kindly sent me samples of the almond and coconut to use as I pleased––I had the salad in mind. The Paleo Bread™ Almond is Gluten Free, 60 Calories, 1 Net Carb, 7g Protein and 5g of Fiber Per Slice. Grain Free, Soy Free, Corn Free and GMO FREE.Panzanella Salad
Salad Ingredients:
6 cups Paleo Bread cubed (I used the almond variety, but the coconut variety will work, too!)
1 teaspoon kosher salt
2 large, ripe heirloom tomatoes, cut into 1-inch cubes
1  cucumber, unpeeled, seeded, and sliced 1/2-inch thick
2 red bell peppers, seeded and cut into 1-inch cubes
1/2 red onion, cut in 1/2 and thinly sliced
20 large basil leaves, coarsely chopped
3 tablespoons olive tapenadeDressing Ingredients:
1 Tbs finely minced garlic
3 tablespoons balsamic vinegar
1/4 cup extra virgin olive oil (we use Frate Sol)
1/2 teaspoon kosher salt
1/4 teaspoon freshly ground black pepperCut the Paleo bread into cubes and toast in the oven until browned. You can also toast the cubes in a pan in some olive oil.

To make the dressing, whisk all the ingredients together. In a large bowl, mix the tomatoes, cucumber, red pepper, red onion, basil, and tapenade. Add the Paleo bread cubes and toss with the dressing. Season liberally with salt and pepper. Allow the salad to blend it’s flavors for about 30 minutes to an hour. 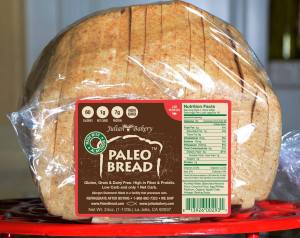 You can find Julian Bakery on Facebook here and on twitter here. You can buy Julian Bakery Almond Bread in stores at these locations or online here.

This past weekend, I needed to make something to bring to a birthday party for a good friend of mine. Since Saturday was packed full of fun activities (including 7.5 miles of running, a tour of the Roush Residence hosted by Sac Mod, and a “wine-by” of Raley’s Grape Escape), I didn’t have a big block of time to spend on the dish. Still, I wanted to bring something that looked inviting and would stand out on a potluck table. Something that would look and taste like I spent more time than I did ;), and something light that would pair well with the hot weather.

So, I was looking on the Nugget Market website for some sort of direction, and this recipe emerged. Thank you, Nugget!!

Of course, I never follow a recipe exactly, so I changed up a few things. Also, it’s not completely Paleo since there is cheese in the dish, but cheese is my little cheat.

When you are prepping the avocados, squeeze some lime juice over them after you slice them to prevent them from browning. To prepare the salad, pretend you are making a lasagna or moussaka. You will have enough ingredients to make two layers.

Layer the bottom of a 9×13 in. baking dish with both kinds of tomatoes and one of the sliced avocados, then drizzle with a tiny bit of olive oil over the layer. Add half of the cilantro over that, followed by half of the cheese crumbles. Then sprinkle half of the cumin and then crack some pepper over that. You won’t need salt because the cheese will be salty enough to season the salad. Repeat the process to form the top layer.