A Day on the Willamette Wine Loop–Stop Two: Tumwater Vineyard 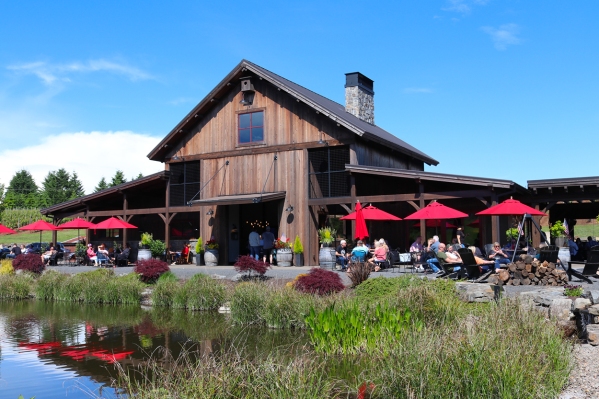 On the Sunday afternoon of my trip to Mt. Hood Territory, I went wine tasting and visited three wineries in the Willamette Wine Loop. My second stop of the day was Tumwater Vineyard, which in the beginning, was not supposed to be a winery at all.

During my tasting flight I was introduced to the owner of Tumwater, Gordon Root (aka the accidental vintner). He told me that he and business partner Rick Waible had initially intended to develop the land that the winery sits on into a subdivision of about 40 homes. However, after plans were submitted and zoning changes took effect, he was only permitted to build five houses, and would have to think of a way to use the rest of the property. Gordon and Rick then decided to fix their dilemma by removing the trees, blackberries, poison oak and other vegetation on the remaining 45 acres. So in 2015, three acres of Chardonnay and fourteen acres Pinot Noir were planted on the land. An additional five acres of Pinot were planted in spring of 2018, bringing the total to 23 acres.

The houses they did manage to build (in which one of them Gordon resides) were selected for a showcase called Street of Dreams in 2016, and the structure that would become the Tumwater Vineyard tasting room served as the showroom. One of the homes is a massive 7,500 square feet and a price tag of $3.8 million. It features enormous 14-foot doors that open directly out to a view of the vineyard and Mount Hood.

$3.8 million out of your budget? No problem! You can still come by the Tumwater Vineyard tasting room and take in the beauty of the landscape for the mere cost of a tasting flight ($15 for four different wines, but complimentary with purchase of two bottles). 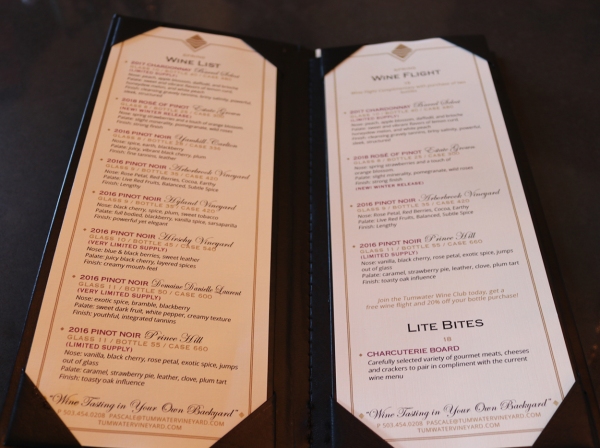 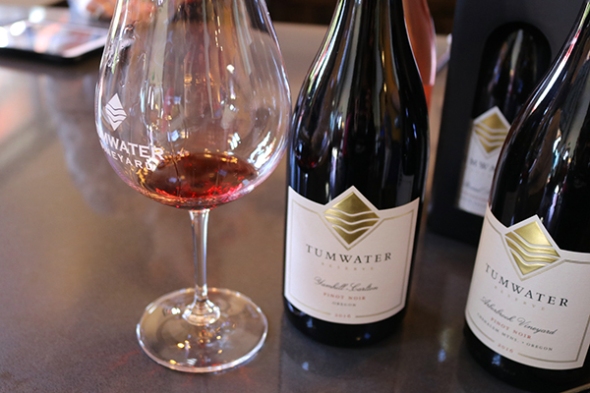 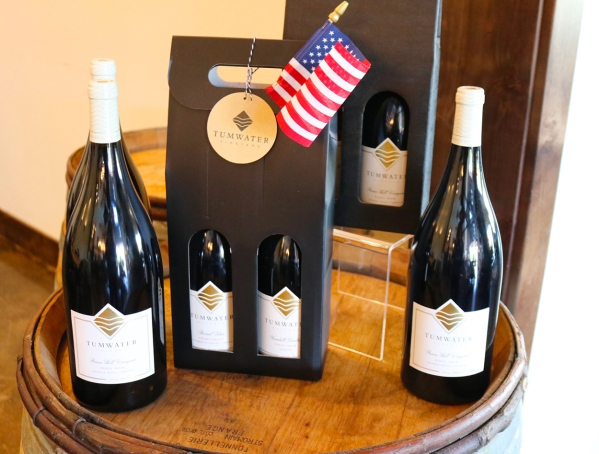 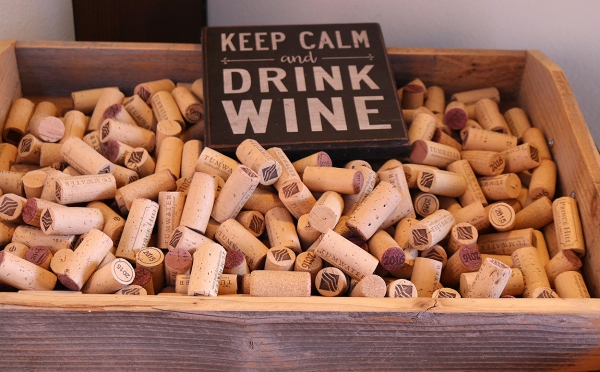 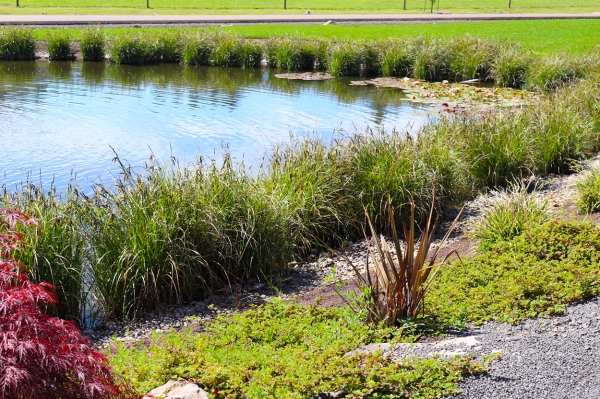 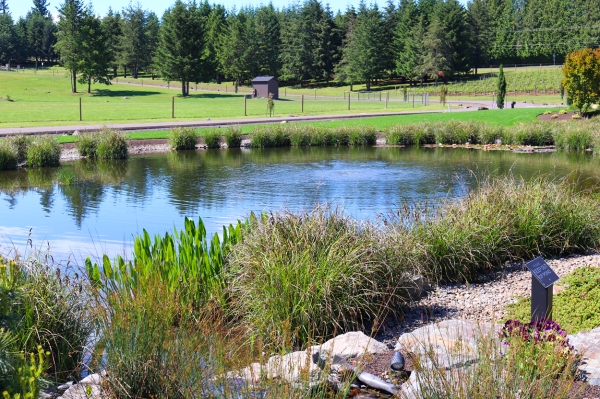 Tumwater Vineyard is located at 375 SW Barrel House Way, West Linn, Oregon. Currently, the tasting room is only open to the public on Sundays, Noon to 5:30pm.

Disclaimer: Thank you to Mt. Hood Territory for arranging my trip to Oregon and this stop on my itinerary, as well as paying for my tasting fee at Tumwater Vineyard.

A Day on the Willamette Wine Loop–Stop One: Campbell Lane Winery

On the Sunday afternoon of my trip to Mt. Hood Territory, I went wine tasting and visited three wineries in the Willamette Wine Loop. My first stop of the day was Campbell Lane Winery. Campbell Lane Winery’s story begins in 1966, when third generation Oregonian Leigh Campbell, M.D. and wife Ceille bought land at the end of a country road on Pete’s Mountain (which is positioned above the Willamette River and looks out to Mt. Hood), and named their property “Campbell Lane”. They then hand cleared fruit orchards on the land and planted the largest Pinot Gris vineyard (2.65 acres) in the United States (at the time).

The Campbells expanded the original Stoneridge Vineyard over the next 50 years and experimented with many different grape varietals. The property’s climate, elevation (700-feet), and the soil–called Jory, (a series of deep well-drained soils that formed in colluvium derived from basic igneous rock, and recently officially recognized as Oregon’s state soil on May 23, 2011)–makes the grapes grown there some of the highest quality in Oregon.

In 2014, the first Campbell Lane Winery grapes were harvested and bottled to share with the public, and their current wine list is succinct with just three types: Pinot Gris, Pinot Noir, Rosé of Pinot Noir. The wines feature the Clan Campbell Coat of Arms (a symbol of courage and hospitality) in the logo on their labels. Campbell Lane has also just grafted 1.75 acres of Pinot Gris vines to Chardonnay, and they plan to release an estate grown Chardonnay in Spring 2021.

I was not really expecting to enjoy the wines I tried as much as I did. I admit I am kind of a California wine purist and a superfan of Sonoma Pinot Noirs. Sorry! Anyway, I tried to keep an open mind going into the tasting rooms on Sunday, and I am glad I did. From wine number one (the Rosé of Pinot Noir) I was impressed.

I went on to the 2015 and 2016 Pinot Gris, and noted they have a wonderful petroleum quality that I really enjoy. I might be buying some wine after all! By the time I tasted the 2016 and 2017 Pinot Noirs, I was sold. I won’t go into describing them too much, because wine is a very personal thing and who wants to read a bunch of meaningless descriptors anyway? I just know that I liked everything I tried, and I recommend them to you. I came home with the 2016 Pinot Gris  and the 2017 Pinot Noir! I can’t wait to open them at home and share them with my husband Andy. 🙂

Before I left, I walked around the grounds of the winery (which are extremely beautiful) and took a few photos to share with you. I noticed people buying wine by the glass and the bottle and enjoying the afternoon with their families and a picnic of both food they bought in the tasting room and food they brought to the winery themselves. I’d really love to go back with a group of people and do the same thing! 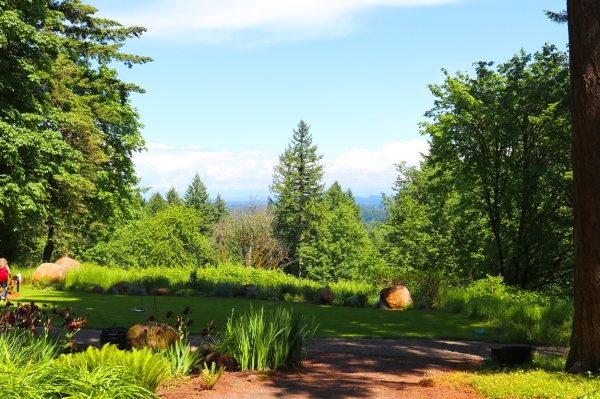 If you need another excuse to visit Campbell Lane Winery, they are having a “Last Friday (of the month)” event tomorrow, May 31st from 5-9pm. Join them for tapas including crostinis, arugula salad, and an apple crumble along with shrimp and chorizo paella from Nineteen 33 Taproom. They’ll also have musical guest Rob Rainwater, performing a “rich mix of originals and classic blues and rock covers.”

If you can’t make it to the winery, you can contact the winery and buy wines from the comfort of your own home.

Disclaimer: Thank you to Mt. Hood Territory for arranging my trip to Oregon and this stop on my itinerary, as well as paying for the wine I purchased at Campbell Lane Winery.

One of my stops during the four days I spent in Mt. Hood Territory was a bakery in Lake Oswego called Kyra’s Bake Shop. Kyra’s Bake Shop is a completely gluten-free (and 100% celiac safe) bakery that sells gluten-free pastries, cakes, salads, sandwiches, and soups. The bakery is owned by Kyra Bussanich, the only four-time winner of Food Network’s popular show Cupcake Wars.

When I entered the shop, I noticed the steady stream of customers both in line and seated enjoying their gluten-free treats. I believe many of the people I saw were locals, although Kyra’s Bake Shop is definitely known for being a destination place (bringing in customers from as far as Florida and New York who long for celiac-safe goodies).

And I had come a long way from California, too. I made my way to the case, excited to order/try several things. I figured since it was already nearly 1pm (and I had another stop for lunch already planned), I would buy some items to take back to my hotel with me to enjoy later.

If you visit Kyra’s Bake Shop, I recommend getting there a little earlier than I did. Some of the items in the case were already sold out. Luckily, I picked up the last Chicken Pesto Galette, as well as the last two plain bagels. I was so happy to get them that you’d think they were the last two bagels on Earth! I was also tempted to try a Unicorn Cupcake, but opted for a Lemon Marionberry Donut instead (choosing only one sweet item for moderation’s sake). I also selected a Chicken Cobb Salad (for dinner in case I was too tired to go out later that evening). Kyra’s has various flavors of cupcakes and donuts available daily, as well as different kinds of galettes (As you will see in one of the photos below, a galette is like an open-faced savory hand pie.). You can visit Kyra’s website to see what flavors they offer on different days of the week. 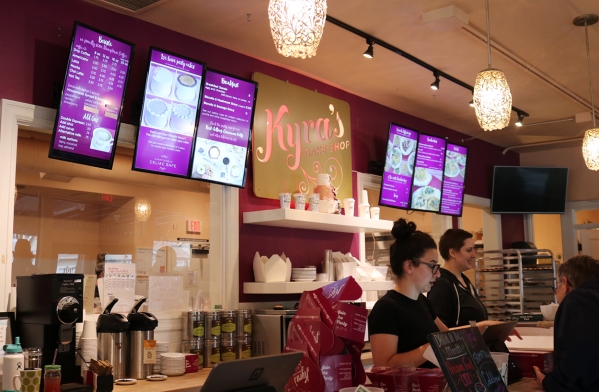 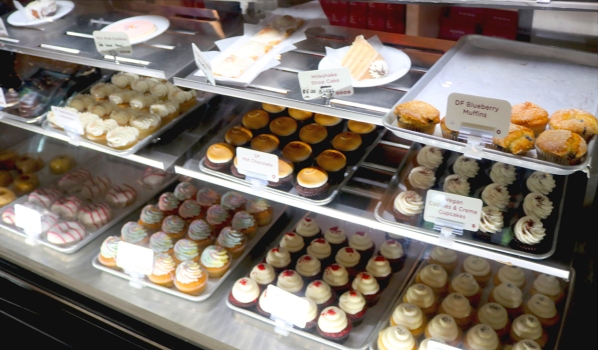 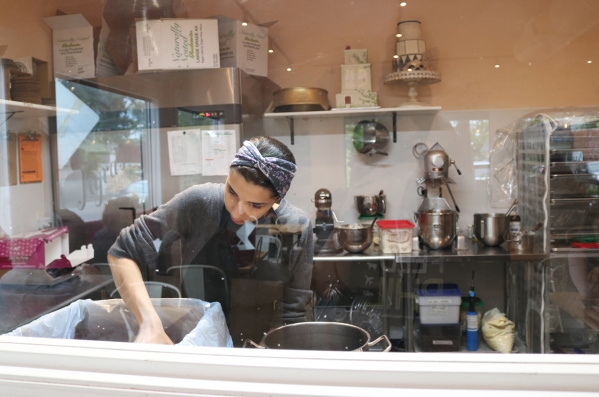 Below are photos of two of the items I bought. The Chicken Galette, and the Lemon Marionberry Donut. I decided they would photograph better back at my hotel, so I skipped taking any more pictures of the case, because the items just didn’t look as good in person through the glass. You can see how amazing both the galette and the donut look up close! 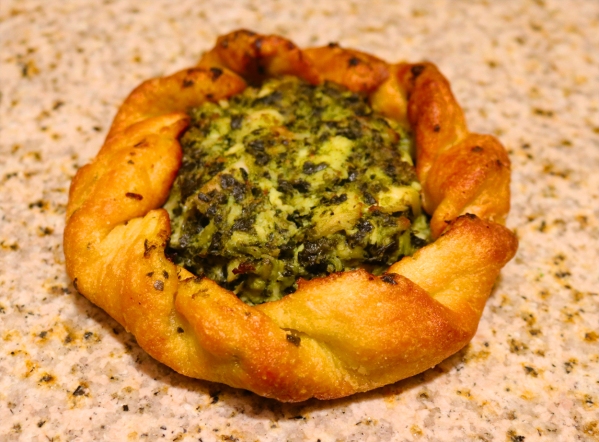 My prediction about being too tired to go out that evening came true, and luckily I had the Cobb Salad and the Chicken Galette to fall back on, as well as some wine to pair with them. The galette dough was buttery and chewy and slightly crisp in texture and unbelievably gluten-free! The pesto and chicken filling tasted perfect after having been slightly warmed in the microwave.

This was the first gluten-free donut I had ever tried. There’s a shop that makes them (gluten-free) in Sacramento, but only on Sundays, and it seems like I can never make it over there that day. So, I was very excited to try this one, because I have already had all sorts of gluten-free cookies and cakes. The donut itself had a cake-like texture underneath all that crunchy glaze. I don’t have any other word to describe it except delectable. It was so devilish that I ate it over three days. The glaze was exactly flavored the way anything advertising “lemon” should be. Like a “punch” of lemon, definitely from the use of lemon zest. The marionberry flavor was jammy and delightfully sweet, and a perfect complement to the sourness of the lemon.

I also bought two bagels, and though they were very good and I was so elated to get the last ones that I practically praised God for them, after all the tasting I prefered the galette and the donut! No matter what, though, I’m definitely coming back to Kyra’s Bake Shop next time I’m in Lake Oswego!

Disclaimer: Thank you to Mt. Hood Territory for arranging my trip to Oregon and this stop on my itinerary, as well as paying for the items I purchased at Kyra’s Bake Shop.