Last Saturday night Andy and I attended a pre-opening dinner at Chicago Fire‘s newest location: 7101 Laguna Blvd, Elk Grove. The pre-opening lunches and dinners were held both on Friday and Saturday in an effort to train the staff and to ensure consistency amongst the other four Chicago Fire locations. 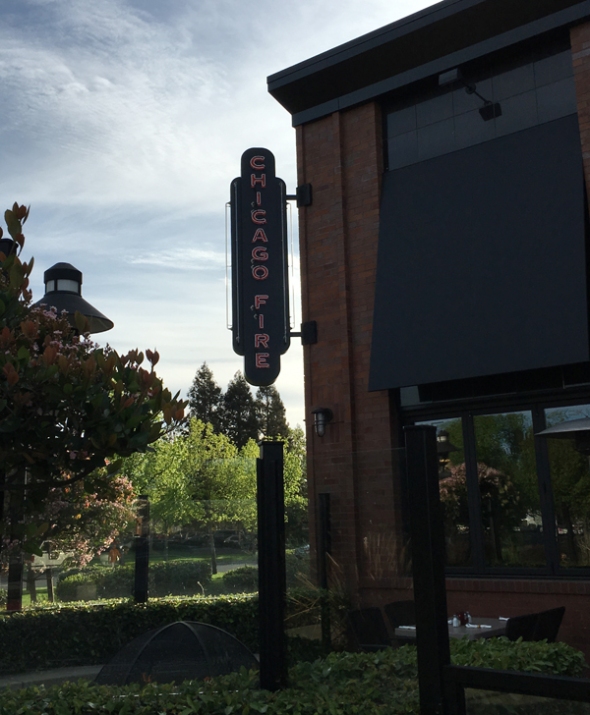 The weather was terrific, so we decided to sit on the patio. The dinner was complimentary for us except for alcohol (and was also free to everyone invited). It included an appetizer, a salad, a pizza and a dessert to share between us. The limitations on food were mainly because it was a training night and an effort to control conditions in service and in the kitchen. It’s kind of like when you are a brand new runner. You don’t just start out running a marathon. You train up to that distance. Likewise, the staff in the new location were learning to run in ideal conditions, a few miles at a time.

I was very excited to be there because I have loved Chicago Fire for a long time. I think it’s a great place for celebrations or just a dinner for two. Also I work for a printer in Roseville (yes, I have a day job) and we print their business cards and takeout menus as well as a few other items. The people running the show at the restaurant are great to work with altogether.

But back to the food we ordered! For our appetizer, we chose the Garlic Fries. Not really something on the diet plan, but a treat to share with Andy and always very tasty/crispy/herby/garlicky. In true Greek fashion, they are served with lemon. Super good. Diet Gods, I am so sorry. 😉

We ordered a few starter glasses of wine, but afterwards ordered this bottle of Windy City Red. It’s a wine produced solely for the Chicago Fire restaurants by Boeger Winery. It’s one of their less expensive wines and a very good value. It’s also a great pairing for anything on the menu with red sauce or any pizza that has meat on it!

Our salad came next and we chose the Pesto Chicken Salad. It’s my favorite salad at Chicago Fire. My second favorite is the Greek Salad, but I can’t resist the pesto dressing. Plus, the chicken on the Chicken Pesto Salad is grilled to perfection, and then there’s all those big cheese shavings on top. I almost wanted to take the salad for myself and leave the pizza for Andy!

Typically, I try to load my plate with greens such as the salad above, and then maybe have 20% of the main course. That way, I have had a lot of fiber, vegetables, etc., and gotten mostly full before I move on to the next course.

Chicago Fire serves a gluten free version of most of the pizzas on their menu. This one is called the Stockyard. If you order gluten free it only comes in one size, but that is OK because with the appetizer and large salad, it was a perfectly shareable size between Andy and myself. The stockyard is a deliciously meat-loaded pizza featuring garlic sausage, pepperoni, salami and Canadian bacon. And of course we got the gluten free crust. I also always order a side of marinara, because I love to dip my pizza crusts in the sauce.

Andy enjoyed an ice cream with caramel sauce, but I decided to pass. Instead, I walked around and took a few more pictures of the interior of the restaurant. 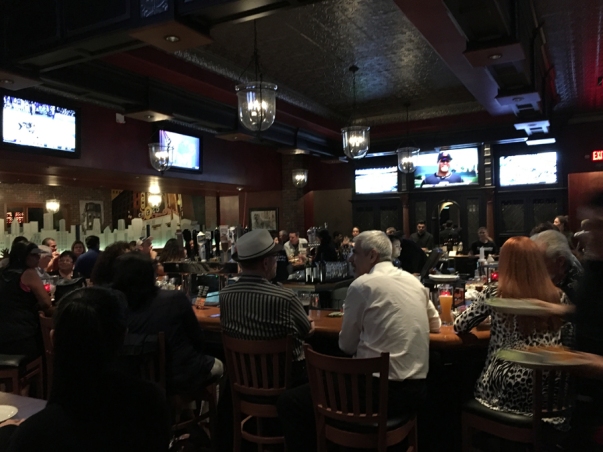 As of all the previous visits we’ve had at Chicago Fire, I would call it consistent and very enjoyable. The difference was the great new location, the fun outdoor experience and the well-landscaped area around the restaurant. 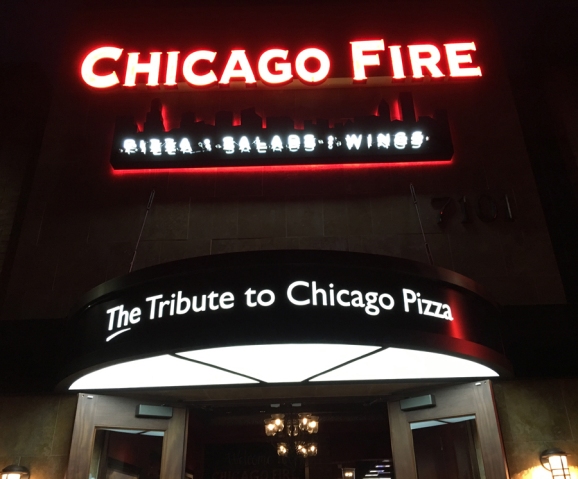 You can find Chicago Fire on Facebook here, on Twitter here and on Instagram here. Be sure to check out the newest location in Elk Grove now open for lunch and dinner! 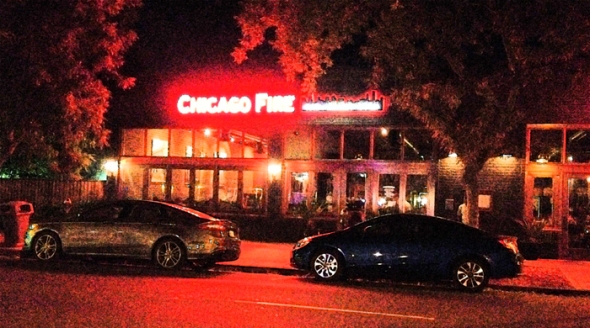 Andy and I were excited to work with Chicago Fire because it’s so close to home and we had actually been there before a few times (thanks to a $100 gift card that I won at a Christmas party my boss threw last year). Don’t ever try to win Christmas Carol Word Jumble against me. You will lose! 😉

We were able to actually use the gift card twice, so we had already tasted their fabulous version of gluten free pizza and already had a favorite wine we like to drink with our dinner (the Windy City Red blend that Boeger Winery creates just for Chicago Fire). 🙂 We already knew the service was great and were lucky enough once to have a server who had adopted a gluten free diet as well. I am seeing that more often in restaurants and it is very comforting.

It’s been a head-spinning 3 weeks since our visit (my apologies to the team at Chicago Fire for not being a little more timely on this piece–life has been absolutely crazy lately with multiple visits to San Francisco, training for a 20 mile race, working 45 hours a week, and being in the process of moving happening all at once). Still, I remember what a great time Andy and I had that night, and we always enjoy the food at the restaurant. So, here’s a recap of what we ordered:

Starter drinkys!! It was Friday night and I was ready for one of the cocktails I had seen earlier in the day on Chicago Fire’s inventive drink menu! I was interested because I saw a few descriptions that were not going to be sweet (like a lot of other drink menus unfortunately are). I picked the Basil Lemonade with Tito’s vodka muddled with fresh basil & lemon juice over ice. It hit the spot, just as I had imagined it would. Basil and lemon together in my drink, yes please! 🙂 Andy had a glass of Bolla Chianti. OK, now we’re all set…

In an effort to make the entire meal gluten-free, we chose the Baked Artichoke for an appetizer. It’s a whole artichoke, doused with lemony caesar sauce and topped with fresh parmesan cheese. Chicago Fire has quite a Greek influence in their menu and many things are flavored with lemon and garlic. That’s a plus in my book and in Andy’s, too because he is half Greek. 🙂 My favorite part of the artichoke was the cheese on top that had slightly browned and gotten crispy, and the way it tasted with fresh lemon juice on it. It was a great lead in to the salad we ordered. 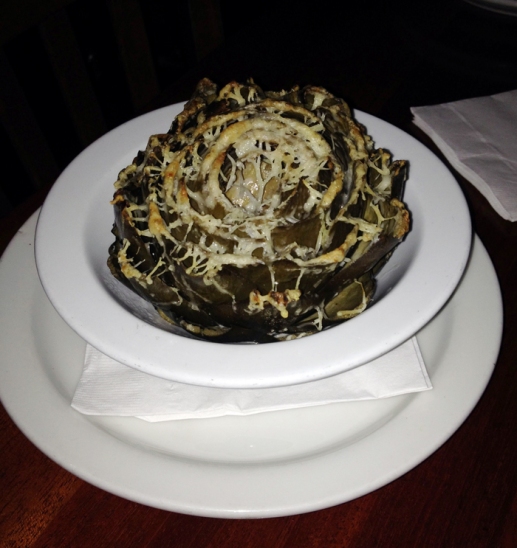 Next up we tried the Chicken Pesto Salad, which is a favorite of mine. It is made of Romaine lettuce, grilled chicken, pesto-marinated artichoke hearts and red onion. We ordered the house made pesto ranch dressing on the side. Pesto is one of my favorite sauces and the dressing that comes with the salad is addictive. 😉 The chicken on the salad was grilled perfectly. I recommend ordering a large size salad because it is perfect for sharing if you are a party of two and plan on ordering a pizza as well. 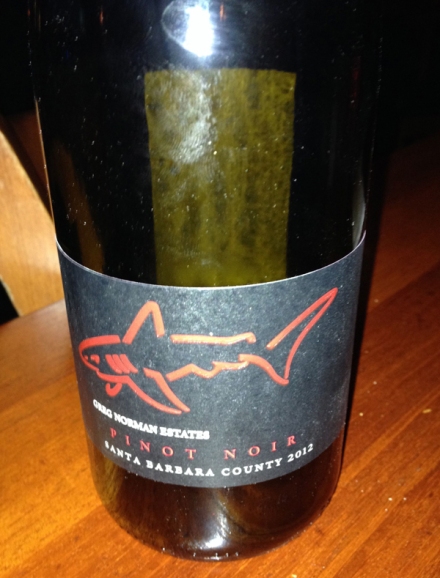 By now it was pizza time! We decided on the gluten free Greek pizza. The Greek is topped with Gyro meat, white Sauce, Artichoke Hearts, Kalamata Olives, Red Onion, Fresh Tomato, Feta Cheese & Pepperoncini and served with what else? Tzatziki on the side. Love it. My favorite part of the pizza (other than the super crispy edges on the crust were the little slices of Gyro meat that had also gotten super crispy/crunchy in the pizza oven. We squeezed the lemon juice over the slices for an extra burst of flavor and the tzatziki lemon combo was just paradise. It’s a real treat for Andy and I to eat pizza/things with crust/bread at all even if it is gluten free, so it was fun to try the Greek flavor combination on a crust. Bonus points for the presentation, one slice of pizza was slightly propped up with the ramekin that held the tzatziki sauce. Beautiful!

Thanks Chicago Fire, we’ll definitely be back for more very soon! We’ll continue to work our way around the menu of gluten free pizzas. We’ve already tried and given thumbs up to the Stockyard and Chicken Pesto on previous visits. 🙂

Chicago Fire has a loyalty program called Square Points. You can points as soon as you get a Square Points card from your server. By registering online, you’ll be able to redeem your points. Then you can earn more points when you buy food, drinks & merchandise. Some of the rewards from the Square Points membership include a free Deep Dish Delight on your birthday, a free specialty pizza for every 500 points, and free corkage. Of course the term FREE CORKAGE was music to our ears, so we decided to enroll in Square Points, too!

Are you hungry for a visit yet?!?! Good news for you if you aren’t near downtown but live closer to Folsom or Roseville, because in addition to the Midtown location on 2416 J Street, there are 3 other locations: Historic Folsom (Chicago Fire made its debut on Sutter Street in Folsom in March 2003), Folsom at Palladio, and in Roseville at Sunrise/Eureka.

Thanks for the wonderful hospitality and service all the way from the marketing team to the staff at Chicago Fire Midtown. We’ll see you again soon. 🙂